May 2019 Driving Stats; EA, Tires, and Summer Heat Is Coming!

Another month in the can!  So I recently got a meter that will measure my home usage which I will be blogging about probably within the next month or so. I have had it over a week but have yet to actually spend 5 mins to hook it up.  But I have excuses. I had to work overtime last week shriveling my normal 3 day weekend into a measly 2 days and it was my niece's birthday which included a concert to see Train and The Foo Fighters so I literally didn't have 5 minutes to spare!

It didn't matter anyway because I haven't charged at home during that time so there wouldn't be anything to report.

Since my next scheduled "adjustment" isn't due till July, I have no degradation to report but the BMS continues to misbehave! 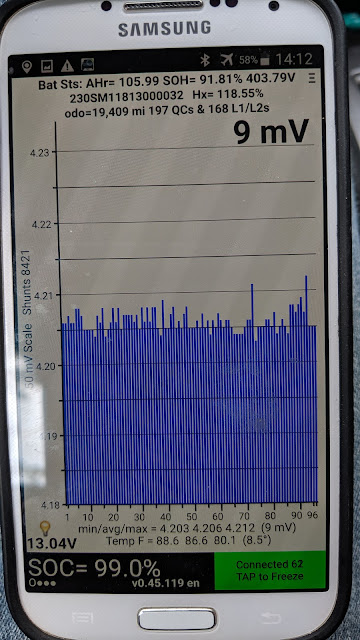 Unlike my previous 3 LEAFs, I was unable to determine what the new pack stats on the 40 kwh LEAF should be due to a rather large variance in the SOC when the pack reached full charge.  This most recent example is just another in a string of questionable results.  The charge was started in early morning and was actually still in the balancing phase since the charging indicator lights on the dash were still blinking but I unplugged and was over 403 volts @ 99% SOC when it should be around 97.5% more or less.  That is playing it a bit too loose for me and marks the 3rd time over 99%!

This is a another reason to not charge to full. The BMS software is simply not doing its job. Its not stopping the charge when its supposed to and this WILL lead to premature pack degradation

Bridgestone is making the news with its upcoming "quiet tires."  We EVers know that the removal of engine and tranny noise has allowed us to notice other sounds that we previously didn't realize was happening and the biggest culprit is tire noise. The linked article claims its not the road's fault as much as we thought it was; its the tires.  Definitely something worth keeping an eye on.  Hoping they put out a LRR version!

Speaking of tires; Summer and the warm (or HOT!!) weather has arrived so if you have not already done so, its time to adjust your tire pressures. Remember, they should be set during coldest part of the day and the increase in pressure as the day warms up (or if doing the Mario Cart thing)  is OK.  Now if you live in an area like the high desert where cold nights turn into blistering hot days, you might want to lower the pressure a few PSI to account for the wider than normal temperature range.

Speaking of Summer, its now camping season. I did show one option that works fairly well for me but if you have a few people besides yourself, you might want a bit more room. Here is another option! 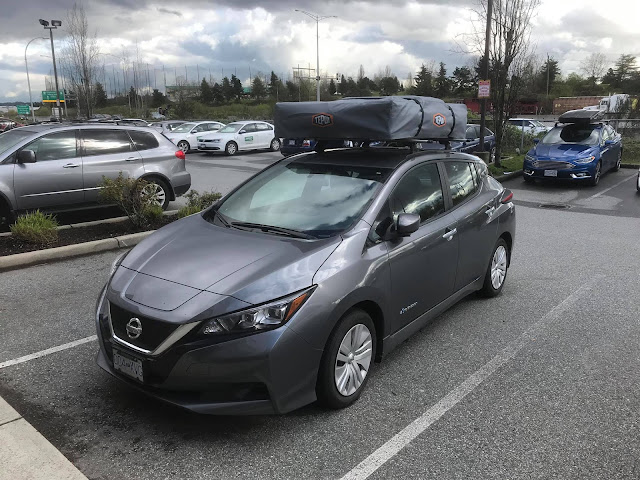 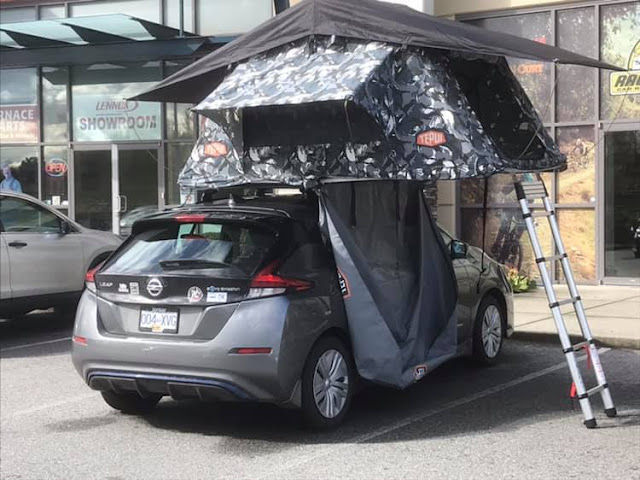 Supposedly, it only "takes a few minutes" to setup but according to the LEAFer that posted this, it requires perfecting the art of standing on tires to accomplish that level of efficiency.  And before you ask, its a definite range hit. No telling how much but definitely want to beef up the charging stops but its portable which is a big plus which means not a daily range hit! 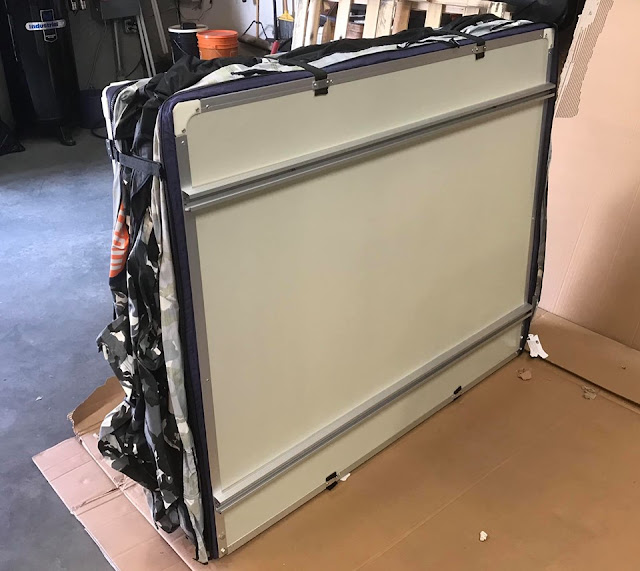 We already knew that Hydrogen fueling stations were a bit of rush job but recently we found out just how much when a station blew up in Norway with a force so great that airbags on nearby cars were deployed.  What is even more shocking is the station apparently was not in use at the time which adds a lot of questions as to what went wrong.  Luckily, the only injuries were from airbag deployments of the nearby cars. Knowing Norway, they may have been electric vehicles. Wouldn't that be ironic?

This tells me that there is still many hurdles to address before Hydrogen becomes mainstream. Norwegian officials recommended a 500 yard safety buffer around the "blast zone." Can you imagine how that would go down when a Hydrogen station permit is submitted for "your" neighborhood?

The one shining light in all this is I can now focus on other things EV like more public charging as Hydrogen is quickly showing its just as useful as gasoline in that it will self destruct.  TBT; EVs are advancing so fast that Hydrogen will never catch up. What is needed is more public charging. Range is nice and Tesla should top 400 miles soon but I will take the reasonable expectation of an available well placed plug over range any day. (and the lower sticker price!) 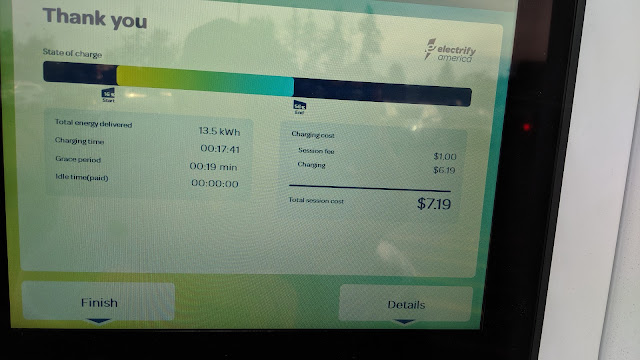 Speaking of more charging, EA has finally come to town!  Lacey, WA Walmart went live at the beginning of June and I was the first successful charge there since 2 CCS'ers tried and failed including a VW (ain't that a kick in the butt!)

But being first does have its consequences and I paid "full boat" price and as my luck tends to be, the very NEXT day, subscription pricing was announced that could have cut my cost in half.  But reliability of the stations has been very poor so far. There are a LOT of reports of failed charges from both Chademolites and CCS'ers all over the country. A few days ago, EA did announce a "roaming agreement" with Chargepoint so hoping they will share some technical knowledge and get these bugs figured out.

For those of you considering a new LEAF; you want to keep in mind that the NCTC (No Charge To Charge) program of free fast charging from Blink, Webasto and EVGO for 2 years is terminating new signups after July 9th.  This is a HUGE benefit and the reason why my total transportation costs (fuel only) was well under $100 for the first year of my 40 kwh LEAF over 15,700 miles.  But there is a caveat; a $2500 caveat.

WA has reinstated their sales tax waiver for plug ins but that does not start till Aug 1st.  This will create a sales vacuum so its now in Nissan's court as to what they will do about it.  The options;

1) It wouldn't surprise me to see sales incentives that equals or approaches the $2500 tax credit. This would make would NCTC a huge bargain especially for those who are getting their first EV and don't have adequate home charging or live in multi unit housing without reserved parking.

2) Extend the program. Nissan is not in a good position saleswise. The returning EVer is a major portion of Nissan's prospective new customer base and the lack of TMS is not going over well especially with emerging reports that the 62 kwh LEAF suffers from the same RapidGate  my 40 kwh LEAF is hampered with. RapidGate makes paying by the minute quite painful. Free charging does not address the additional road time but at least it won't cost the EVer. Nissan has had some success with simply selling at bargain basement prices. This might be the way to go until 2020 when they will finally provide an EV with the TMS option.

3) Do nothing. Nissan could simply sacrifice WA State sales for July knowing there will be a rebound in August.  But that only allows the possibility of more negative reports over RapidGate as the Summer heat intensifies.  The problem with negativity is it creates doubt where none should exist.  People read the stories, magnifies its results and then find ways, no matter how obscure, to apply it to their needs.   There are too many people concerned about the issues of full charging but admit they only charge a few times a week because of the additional range.  This is how a smidgen of  bad news mushrooms into Armageddon.