Betting this headline has your head full of questions!

Question; What happened? Another accident?

Question; How can we have a monthly drive report when the month is not over?

Answer; Well the Month of November is over for my 40 kwh LEAF. It is now on its way to a very deserving family!

Now that the "adjustment" for October is more than a month overdue, I have to think it is just not going to happen.  Maybe my diligence in keeping SOC below 75% most of the time has paid off? I have only been over 85% 4 times in the past 4 months. Each time it was when plugged into the free Voltas at Capital Mall while watching a movie.  In fact, twice I charged to 99%.  But other than that; I have keep it between 20 to 70% and it would seem my pack likes it. If you recall, on my last negative adjustment in April, I was on track to be about 56% SOH at 100,000 miles, a shocking rate of degradation for a pack of this size.

But then came July's adjustment and for the first (and only) time, my stats went up. Other than this event, I never saw even a .01% rise in the numbers in any of my daily checks.

Many Teslatonians also reported that their packs seemed to lose a chunk of capacity early then seeing the rate slow down considerably.  Could it be that the car simply learned the driver's habits and now provides a more accurate estimation of range?  That wouldn't surprise me since Tesla knows everywhere the car is going, terrain, weather, driver style, etc. But for a LEAF? Especially an S with no telematics so no active way of tracking the movements?  A Bit stretchy I think.

If you follow my blogs, you know I was seeing rather large adjustments every 90 days based on the build date. These adjustments covered over 90% of my capacity loss to date.  I lost chunks of capacity in April, July, October 2018,  January and April 2019.   But then July 2019 happened and the numbers went up.  How shocked was I?  We all know that the battery stats tended to bounce up and down based on our charging/driving habits. It seemed the more you drove, the higher the numbers would be. Fast charging seemed to bounce the numbers up as well.  Granted, all those increases were temporary and returned to their previous levels after a few days of "normal" driving.

That all changed with my 40 kwh pack. I track my battery stats EVERY day recording miles driven, miles/kwh,  Ahr, SOH and Hx every morning before the first drive of the day.  Before and after that July 2019 adjustment, I had never seen ahr or SOH go up. Not even a tiny bit. Not even one time. 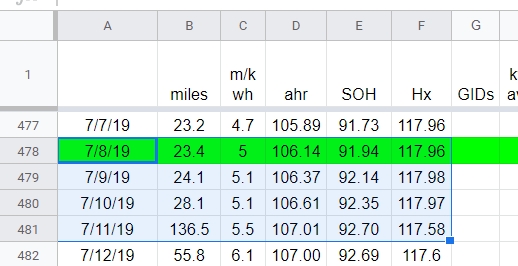 Just like that I was almost back to the level before the April 2019 adjustment.  Why it happened, I haven't a clue. It did coincide with the start of warmer weather but we all know weather is one thing, baking the pack on a QC is another version of the same but more severe.  Since the RapidGate software fix didn't happen till August 1st, it wasn't that either. If anyone out there has theories, bring them on! Love to hear them.

Of course, its possible that the negative adjustments could come back at any time but I think the July jump signified the BMS overdid itself or something and gave it back.  I would like to think it was my world class battery management techniques that righted the ship! But.... I did the same process last year and it didn't do any good. I guess better late than never?

One final note on the battery; The negative AND positive adjustments I saw were also seen by many other LEAF drivers. Truth be told, most people don't check their stats often enough to fully verify the every 90 days interval  but there were people out there that took measurements enough to verify they were seeing the same things as me.

Notice the 200 L2's.  At least 100 was due to my "only charge in the morning" experiments. I was plugging in for roughly 90 mins every morning before heading out to work.  At any other time, I was mostly QCing.  I also "double dipped" a few dozen experimenting with my charge timer. When the timer is set you will get a "charge event" when the EVSE is plugged in and another charge event when the timer goes off. 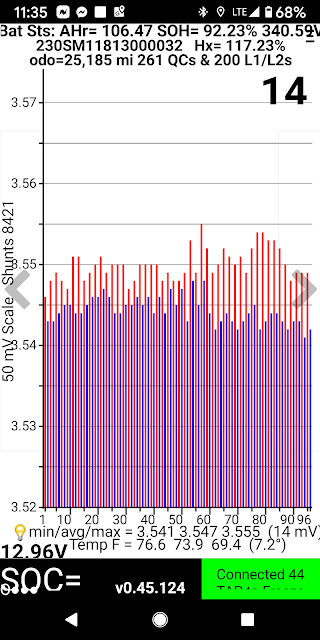 I was seriously thinking about buying this LEAF (first time LEAF buyer!) but still had caveats. Either the battery had to degrade quickly enough to reasonably guarantee I would get a warranty replacement or slow enough that it would last at least 6-7 years which meant 100,000 to 120,000 miles.   So I pretty much had a "no buy zone" of 70% to 80% SOH projection at 100,000 miles. Over 80% and I could manage with that. Under 70% and I would find a way to get the required degradation.  And yes, I will admit the $9655 residual was a very strong pro buy point that was hard to ignore.

But I didn't make it that far so if looking at lease/cost basis its 31.9 cents per mile.  Not too bad but of course, there are other expenses like maintenance... oh, wait. Wasn't any of that. I did buy wiper inserts and had planned to swap them in but since I now have new wipers, that expense will transfer.

Now, I suffered tremendously thru 2 leases (the only ones I actually completed) without NCTC so starting with the 30 kwh, I kinda sorta went hog wild on the freebie thing. I did plug in occasionally mostly last Winter so did rack up a bill (about a 3rd of which was public charging fees) of  $134.19 but that barely changes the TCO calculation... :)

I only have a few months left and will be taking advantage for sure but my 40 kwh sucked in 4632.8 kwh courtesy of Nissan perks. I also collected another 268 kwh from free level 2 charging mostly from Volta at Capital Mall.

All in all, a great car.  The range is sufficient to cover even extreme commutes. The worst efficiency I saw was about 105 miles on a charge but that was driving in monsoon conditions on the way to Portland. Typical WA winter drives saw 120 on the lower end.   Despite the capacity loss, I still did several 150 mile drives this past Summer on a charge without issues.  I know there is a lot of talk about TMS and why Nissan doesn't have it but its becoming clear to me the issue is less the heat and more the SOC.  This led me to the conclusion that more capacity is what I needed but not for road tripping. More capacity allows me to live in the middle of the SOC range much easier.

IOW; the deadly combination you want to avoid is high heat and high SOC. High heat alone won't do it. When I noticed my degradation rate dropping off (easy to notice when I just "dash it" when the numbers don't change and I am looking at whole pages of dashes where the  numbers might change 4-5 times) I decided to not charge at home for road trips.  Twice I started 400 mile trips with an SOC UNDER 20%. Needless to say, it didn't take long for my pack to get hot and stay that way.

This created a lot of firsts for me.

First time ever seeing power restricted due to heat (happens when  you get over about 132º)
FYI; I only lost about 6 of the 16 power segments. In my day to day driving, I could lose 8 of them and never know it. I simply don't drive like that.  (unless I am showing off)

First time at 12 temperature bars.  Not really a big thing, except I did it about 5 times including 3 times on one trip.  Interesting note; Before the RapidGate update, I couldn't even hit 11 temperature segments simply because the QC rate drops to nearly nothing when the pack gets hot.  Last year at North Bend,  I charged at 14 KW and the temperature DROPPED from 124º to 122º!

Despite all that, the degradation rate stayed low. So if you want to preserve your pack simply don't overcharge.  Charge to what you need and no more and yeah, some days it will be a full charge but most of the time its not.  So if you can make it work at 80% do it. 70% is even better.  Without custom charge settings, its a challenge to manage but after testing, I found it takes only a few days to figure it out. If you are like most of us, your driving needs fall into a range that is no more than 20-30 miles wide.

By now you have all guessed my next blog will be introducing the newest member of the family.  Some of you might be wondering what it is while others of you might have already guessed since I have dropped several hints on Facebook, MNL, etc.  I haven't settled on a title for the next entry but a few proposed and rejected;

"One For The Thumb"  Sounded good at first until I realized it was the Pittsburgh Steelers War Cry the year they Beat the Seahawks in the Super Bowl. Definitely don't need reminders of that!

"Some People Never Learn"  Kind of a joke but implies that mistakes were made which is far far far from true.  Any purchase decision requires weighing and balancing several factors. I think I scored on this one and I will tell you why!.... Soon.

"If You Are A Deserving Family, Go See Ray!"  I think that one speaks for itself.  😎
Posted by DaveinOlyWA at 4:10 PM