On Friday about 5:15 PM I was on my home leaving the office and headed down 54th St South to Tacoma Mall Blvd to get onto I-5.  There are 3 westbound lanes and I needed to get into the center lane to get on the I-5 ramp SB.  As it always is, the traffic in the center and left lanes were backed up several blocks north past me while the right lane was nearly empty. 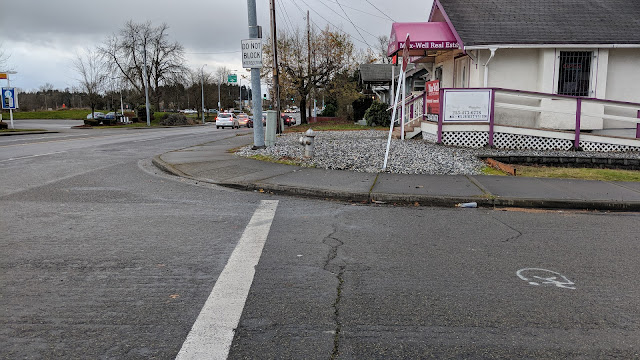 This where I was on 54th St. Picture is facing west. The cars you see are
in the center  left turn lane to enter I-5 SB.

The plan was when the light turned a block south of me and traffic started to move, I would see if anyone would let me in. So I was staring at the light and happened to turn and look to my left and there was a car headed right at me doing at least 40 mph. My first reaction was punch it and get out of his way, right?  But since I wasn't driving the new Roadster...

A half second later after traveling about 15-20 feet sideways, I was now on the rocks you see in the picture above with the car that hit me had rotated and was parallel to me. My face was literally 2 feet away from the face of the other driver. 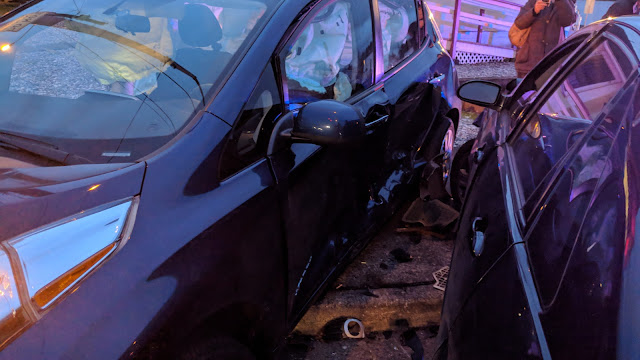 Apparently, there was a motorcyclist headed NB on Tacoma Mall Blvd who turned left onto 54th St in front of the car that hit me and he swerved to miss the motorcyclist (who had his rumored to be 3 YO Daughter on the back) to hit me.   Now this wasn't the first time I had seen an accident caused by someone turning left here and it wouldn't be the last one "today"...

Well, I couldn't open the driver's door (not enough room anyway) so I crawled out the passenger side and quickly found out why I hadn't moved farther. Looks like the sidewalk won this battle. 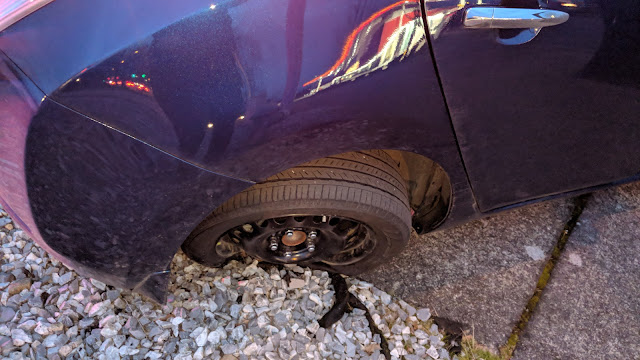 Now I have heard stories about adrenalin taking over and masking the pain of injuries and all that but I felt fine. The front airbags, well known for causing as many injuries as the deaths they prevent, did not deploy. All the side bags did but other than a "busy 4th of July" smell, they did not hurt me at all. I have to guess the curtain bag prevented my noggin from ricocheting off the window so I am grateful for that but to be honest with you, it happened so fast, I am not sure what my head touched or didn't touch.
\
Either way, the car was not drivable so I called a tow truck driver and guess what? The same guy who had towed me to Puyallup Nissan a few weeks ago to get my PDM replaced, took the call but guessing, he is wishing he hadn't.

From our previous conversation, I know he lives down Highway 512 towards Puyallup so he approached the accident scene headed NB on Tacoma Mall Blvd to make that left turn and...

BAM! he hit a car!  Two accidents caused by people turning left in less than an hour!

Well, I had the LEAF towed to a collision shop in Lacey a few miles from my house mostly so I could take pix in the day time and double check to make sure I had not left anything in there and I have to say by the light of day, I realized that I was VERY lucky.  It could have gone real bad.  I am certain had I been in my Corolla, I would not have fared nearly as well. 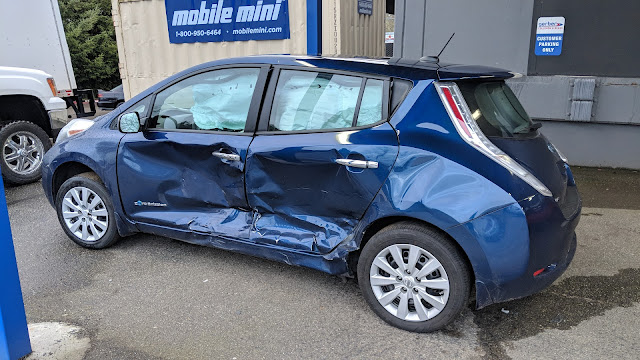 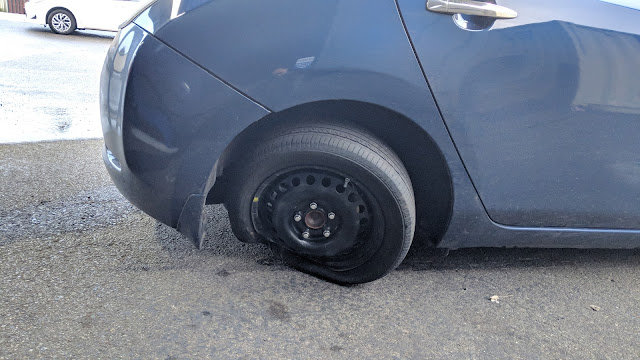 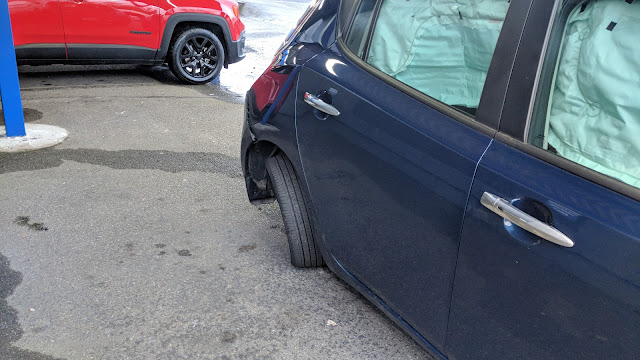 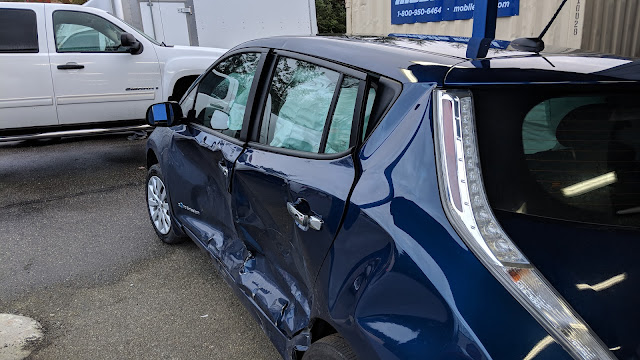 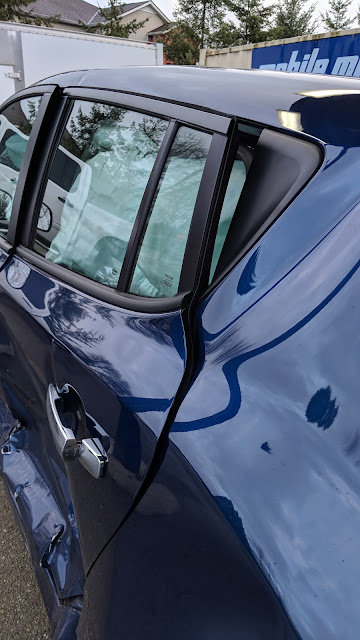 This could be a problem with our rainy Winters! 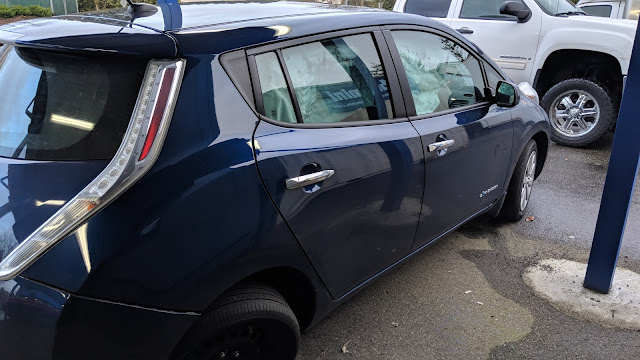 No, the rear wheel isn't supposed to turn!

Sadly, she came up just short of 30,000 miles and I was so proud of the fact that she didn't even have as much as a door ding!

But how did I fare so well? I was hit pretty hard but then I realized that in order to protect and  support the battery pack, extra bracing worked to protect passengers inside the box the battery pack lay under.  Despite being shoved sideways up over the sidewalk, trashing the wheel, etc., the cabin was completely intact. I was not even close to being in real danger. 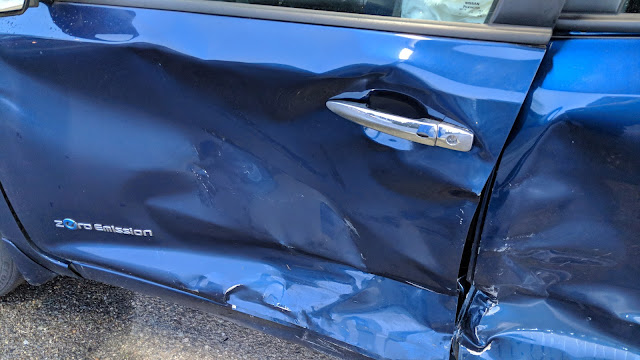 Looks bad doesn't it? Especially when one is sitting a few inches on the other side but 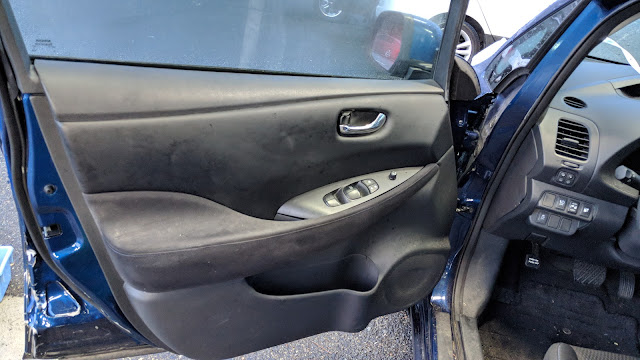 None of the impact is visible from the inside of the door. None.  And before you say it, I am not "that" much of a slob. All that white powder came from the side air bags and a total of 6 deployed; 2 on each side in the front plus the two curtain bags in the back. 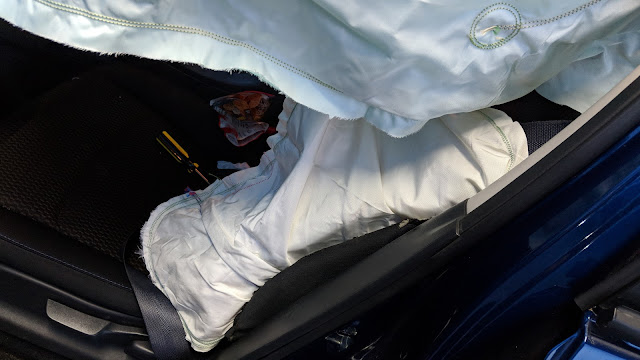 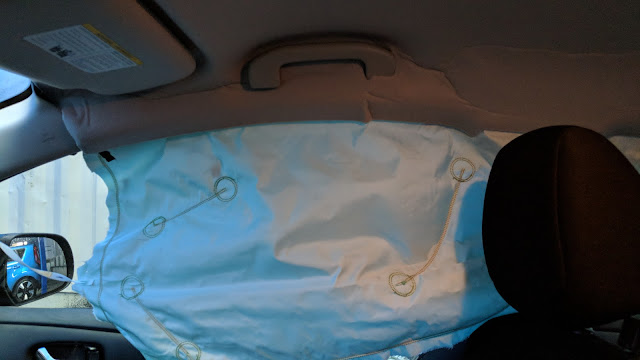 I can't even been to express how grateful I am that my LEAF gave all so I could be here. Its been 72 hours now and I am still not feeling any aches or pains and tossed in a 9½ hour workday yesterday and a 13 hour work day today.

It was THE best LEAF I ever had. 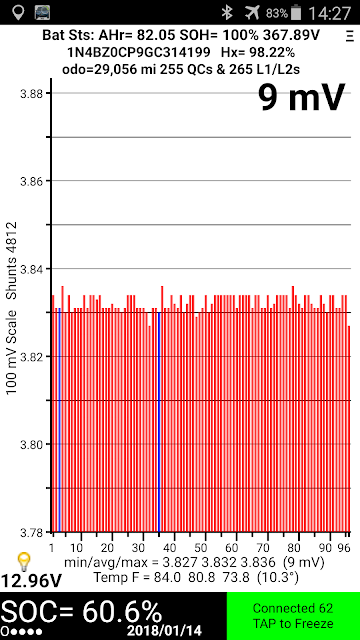 Posted by DaveinOlyWA at 7:57 PM