December 2017 Drive Report; Getting Ready For The Best Year Of The EV Revival!

Well, a reality set in. December is the slowest work month for me by a long shot so the mileage I put on the LEAF this month is a bit shocking.  Like last year, I expected to be at or below 1000 miles but that was not to be.  I guess my holiday meanderings were more extensive than I thought they would be.

For the month, the LEAF traveled 1319.9 miles costing $25.56 or 1.9 cents per mile.  This is a bump from the norm because of a Semaconnect charge of $20. Without it, it would be well under a penny a mile like it has been all year long.   NCTC as always was the largest contributor of the month pitching 269 kwh.   Without NCTC and being billed the normal tier one rate (which actually wouldn't be accurate) my cost would have been $48.77  or 3.7 cents per mile.  As a side note; had I been a paying member of EVGO, I would have amassed a bill of $1227 for the year with $19.95 monthly and 20 cents per minute.  Although the reality is I had a grandfathered plan of $14.95  a month and 10 cents per minute but had to cancel that because EVGO was simply too confused... 😒

Now a lot of people would be unhappy paying over $100 a month for public charging fees and realize this is only one of 6 different networks I used but well over 80% of it was for work purposes, a job that reimbursed me $6200 in TAX FREE mileage reimbursement so its not nearly as bad as it sounds... 😊

I feel it fair to provide a bit of a disclaimer. Had I really been paying for the EVGO network, I would have had more charging sessions but shorter ones. I doubt I would have charged below 30-35 KW due to the per minute cost.  During the my busier months, I had a lot of 15-20 minute sessions anyway mostly because I was getting a charge I really didn't need and stopped to get some work done that I would have had to do when I got home anyway so it was a 2fer...

In reality, I think I would have stopped  charging in weather below freezing as well.  Too many times the charging rate started dropping at 60-65% SOC as opposed to it dropping at 82-85% in Summer! 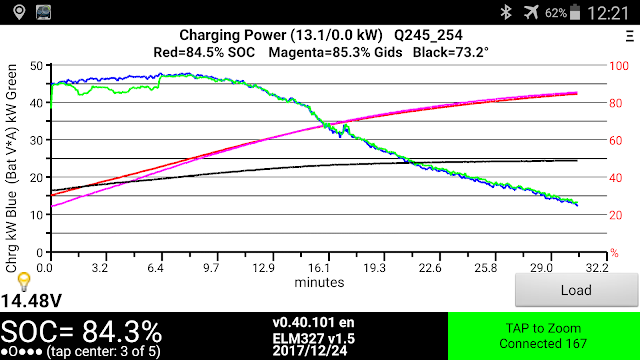 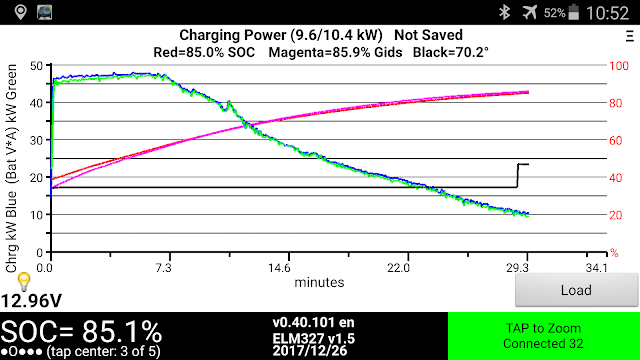 Using the Blink at Tahoma Market with warmer ambient temps but battery temps still in the same range, I saw no slow down at all.  It was a shorter 28 min charge (Since Blink will run forever) which would have been the case always to make sure I did not get billed any extra but it was also time constrained charge so I really should have pulled out at 25 mins but got sidetracked by a call...

**EDIT**
Will post pix but had hiccup with LEAF that will be in another blog when the issue is resolved. 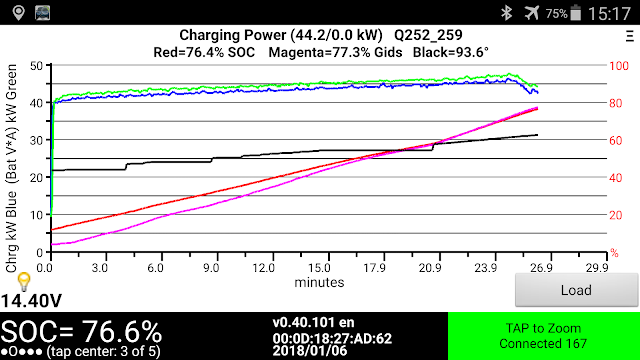 As you can see, the Blink did ok. Have to think the batteries were warmed up a little??

My LEAF Spy low water marks (which interestingly happened on the 30th and not sure why) were GIDs 363, ahr  79.68, SOH 100%, Hx 95.03.  To contrast, my ahr was 82.34 and Hx was 100.21% on the morning of the 30th (the 29th stats are recorded the next morning before the days drive so technically the miles I drove is on the right day but the LEAF Spy stats are recorded one day in arrears which is something I can live with) So the drop happened in one day AND coincided with first full level 2 charge in SEVERAL weeks which probably doesn't make a difference but still interesting anyway.

A lot of discussion on losing efficiency in cold weather.  First realize, my Corolla ONLY  does high efficiency driving. Nearly all freeway, ZERO short errand runs, etc and it still shows a 14% degradation over Summer.  Add in the normal day to day most cars endure and that efficiency drop would be AT LEAST double.

On a brighter note; Dustin a LOOOONG time LEAFer, has decided after 110,000 miles to replace his battery in order to get another 7 years worth of use and his price?  $5600 which is what you were probably expecting me to say but realize WA State EVness is tax free (this includes labor!) so what you see is ALL of it! 😊

Posted by DaveinOlyWA at 6:17 AM