Insurance, Leasing, and Valuation; The Near Final Chapter Of My 2016 S30

Previously I posted my car was worth $14,000 at least according to my insurance company. Well the financial process is just about settled with only ongoing costs (car rental) and collision deductible not reimbursed. Well the math doesn't work out so either;
1) My LEAF is worth about $1400 more than they said
2)My insurance company was able to negotiate a lower settlement with NMAC.
Whatever the reason, one thing is very clear;
Ray; I simply did not thank you enough for the great deal you gave me on my LEAF!
Finally; for those of you who put down payments on lease LEAFs and are afraid you would lose all of that if you had an accident early in the lease, realize despite what the NMAC policy appears to say; its all about what your insurance company will do for you. On my 2011, I put down a VERY large down payment to reduce rent charges and was told I made a mistake. But as I mentioned, I asked my insurance company how they would handle a loss before I did it and 7 years later, they did EXACTLY what they said they would do.

All of this is quite a surprise to me. I figured I might get a few hundred or so based on the current balance of the lease 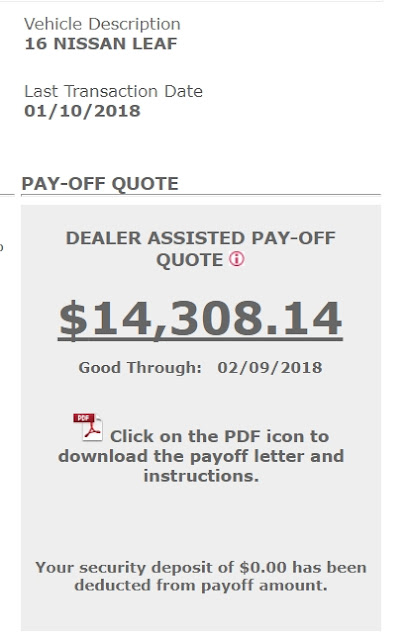 After all, I still had 22 of 35 payments left on a zero down lease. I couldn't possibly be that far ahead, right?


So my insurance company sends me the evaluation based likely on a bunch of degraded California cars which kinda depressed me especially when thinking if they would have read my battery degradation rants, the mighta gotten a few hundred more! And now that few hundred is coming directly out of my pocket!

What is not shown is a "small" deduction based on what they say is "excessive" mileage. I have no idea how they came up with that claim! I averaged less than 68 miles per day! I thought about mentioning the monthly average mileage but THAT did seem a bit high...

It has always been my knee jerk reaction that insurance companies only cared about their wallet. Little did I realize how beneficial it was for me to be on their side against the opposition!

So how did this "creative" math come about? Recently someone was asking whether NMAC was dealing on lease buyouts. Is this the result? Can I. the lowly consumer have negotiated this discount?

Stay tuned for the final chapter on my 2016 S30 for the final eulogy. I haven't got a title for it but thinking about "How to lease a LEAF for MUCH less than $100 a Month"

One final and VERY important note; Now that Farmer's has a LEAF they don't want to keep. Watch out for auction listings. I am still owed the collision deductible plus rental car reimbursement which will come from liable party or from proceeds of the auction; which ever comes first. So bid high because Daddy needs a new LEAF!! 😊

A few people have asked why I let my insurance company handle the claim paying the $1000 deductible and car rental out of pocket (discounted thru Farmers) and my response;

I did it because Farmer's would have completed the claim much quicker reducing the amount paid to NMAC and getting me "some" money right away. As seen, I have already started getting money but if I had filed a claim against the liable party's insurance company, I would still be waiting for my first dime.

I also have full faith that the money will all come back to me and whether it takes a few more weeks or a few more months, it does not matter to me. I don't need it to replace the LEAF so its not a hardship to me to wait. FYI; On my 2004 Prius, it took over two months to get a settlement check from the other party's insurance company and this is despite the fact the other party accepted full liability immediately.

Just got word from my dealer that earliest deliveries of the 2018 are not happening before Feb 12th so hopefully I will be celebrating Lincoln's Birthday AND a new addition to the family!

The final chapter will be in a separate blog but just talked to adjusters from the other two insurance companies involved and both are claiming a likely quick settlement based on corroborating witness statements from bystanders and the other two drivers along with a police report assigning zero blame to me, 12% to the car that hit me and 88% to the motorcyclist. So should have another check for $1280.88 for my $1000 deductible and car rental expense within "5-15 business days"

Well I finally got my $1000 deductible back in April and a 60% payment from Motorcyclist's insurance company of my out of pocket expense in October.  The other 40% to be paid by insurance company of the driver of the car that hit me but they are still disputing their liability so still waiting on that exactly one year later.

BUT...The payment made to me did not take car of the $1000 deductible which I thought was paid to the insurance company. Instead, I received letter in mail from Nissan I still owed them $1000 for accident claim.

So this means if I get my  $112.35 for the remainder of my out of pocket, I will be about $500 ahead. If not, then the recommended course of action is small claims which I am debating as to whether that is feasible for me to pursue.  Either way, I "promise" this is the last edit.  :)

Posted by DaveinOlyWA at 6:50 AM