I have seen dozens of 2011-12 LEAFs on sale ranging in price from $3,000 to as low as $500.  Granted, they are 8 and 9 year old cars and some people are simply hard on their vehicles.  But even showroom new LEAFs were selling well below their value and the reason?  Range.  In my last blog, I detailed how Nissan is giving some of those early adopters viable options for restoring that new range to their LEAFs and this is a good thing. Many of them have a LOT of life left in them. (if not range)

But Nissan made a mistake when introducing the 24 kwh version. The first adopters were generally higher income, techies, greeners or whatever  and most tended to have high paying jobs in city centers that allowed them the luxury of living in the more desirable suburbs and its higher quality of life.

This meant the average 38 miles a day driven in America was frequently their one way commuting distance.  This was simply too much strain on the smaller pack. Tesla understood this immediately when ending their 40 kwh option. It simply wasn't enough for proper battery maintenance and longevity.

Now there are a lot of reasons early LEAF packs degraded quickly and deep cycling of the pack may not have been a chief cause but the limited range of the 24 kwh pack, no or very little public charging, and range anxiety meant many were charging to 100% in less than desirable conditions. This mean few battery management options for most.

As mentioned in the previous blog, Nissan is having a bit of a fire sale on 24 kwh packs pricing them at $4500 after exchange (yes, you MUST give up your old pack) plus labor and parts (bracket required for 2011. 2012 and Japanese made 2013 models.)   That meant a like new car for well under $10,000.   Two have done it so far but with the multitudes of 24 kwh LEAFers out there, why is there not a rush to the dealership to get this done. This is the reason I switched from buying to leasing at the last second.  I realized that 24 kwh would never work for me long term no matter how well the pack stood up. It simply wasn't enough range.  I wasn't alone.


DIYers To The Rescue!

You may have noticed that EVers have had relatively little support. Many dealers stock EVs on the lot but do everything they can to not sell them.  Even when a dealer is motivated to sell, they simply don't have the knowledge or intentionally misleads the buyer into believing something that is not true.  This has been mitigated a bit by social media where I recommend one go to get advice before making any purchase decision.   Advice; the more detailed you are in your ask, the more likely you will get information you can use. Generalize and you will get general answers you must sort thru and no one should make a purchase decision based on that!

Early on, two apps emerged quickly as the go to for the adventurous LEAFer; Plugshare and LEAF Spy Pro.  Both were basic grass roots campaigns that came into being mostly on the backs of a handful of people; most of which were simply EVers looking for some help. Instead of waiting for manufacturers to give us tools, they went out and filled the need.

As  LEAF pack capacities started to grow (while battery cases did not) the common question became "why can't I pay extra to get the bigger pack?"

Nissan's blanket answer was simply "Due to programming changes and other issues, that is not technically possible nor financially feasible."   And that was the end of it.  Thankfully, some people just can't take no for an answer.

Success!! If You Are Willing To Travel... A LONG Way

Undeterred by Nissan telling us it was impossible, tinkerers went to work. Just over a year ago, stories of progress started emerging.  New things were learned and shared and others took that knowledge, added a bit of their own.

Soon, working success stories started populating social media. Last summer,  A 24 kwh LEAF with a 18 kwh extender by Muxsan in the Netherlands.  A great solution perfectly integrated into the BMS and charging system.  But it took up space. Still something that would be useful for many. But that solution was 5,000 miles away on the far side of the Atlantic Ocean.  Yeah, Europe was happy but...

During this time, stories from New Zealand from people discovering more about how the LEAF recognizes battery packs.  Soon, they would have a way to allow different battery packs to communicate with the BMS.

Then last fall, news of a working gen one LEAF with a 62 kwh pack hit the internet! This would have been monumental news for the LEAF community in America but this time it was Canada (which is good since "Western" Canada is only 150 miles away) but this was Eastern Canada (which is bad) Granted, not Europe, but still 3,000 miles away.  So if you are near enough to Trois-Rivieres, Quebec Canada, then Simon Andres is the man to see. He has upgraded a few LEAFs now so his process is verified to work.

But Simon's location was still a problem. It was simply too much of a logistical challenge. I did follow several threads on Facebook with people living near one of the international bridges (Michigan has 3) to Canada but even that "semi" close proximity had huge hurdles to negotiate.

But then I got a call to come test drive THE most famous LEAF in the Pacific Northwest. This was LEAF # 1561 driven by the Quarter Million Mile LEAFer Steve Marsh.  He put 141,000 miles on the car in just over 3 years and then passed it off to his Mother who added another 10,000 miles but by this time, its range wasn't even enough for her. 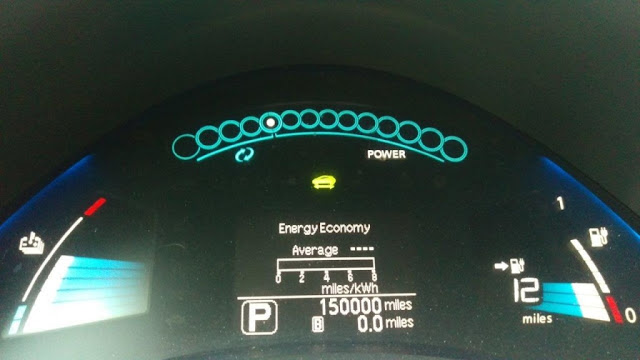 A full charge with its remaining 6 capacity bars barely netted her 35 miles.  Despite the interior being in very good condition, Steve was unable to sell it for any reasonable amount of money. His $2,000 sale price didn't even garner a single inquiry.

Luckily someone did see the value and long time DIY EVer and SEVA (Seattle Electric Vehicle Association) member Jay Donnaway bought the car.  Immediately they put in a salvage 40 kwh pack and ran into the normal compatibility problems. The car was in limp mode unwilling to accept the interloper. But Jay reached out to the reigning battery upgrade guru, Simon Andres for some advice.

We Have A Local Source!

Yes, one still has to cross a body of water for this solution, but this time the location is closer and even better; it has a ferry terminal!

So I charged up my LEAF (needed 34 % SOC to make it there going the "long" way) and drove the 80 miles to EV Works on Bainbridge Island, Washington.

Being a long time DIYer, I expected Jay to have several projects non LEAF going and was not disappointed.  He had just gotten life from an ancient NEV as I walked in. This Dynasty IT NEV is slated for duty doing local delivery for Proper Fish 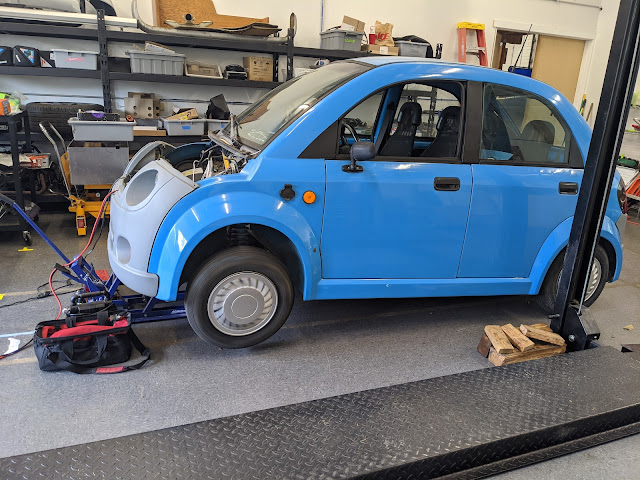 If you want a great plate of English Style Fish and Chips, Proper Fish is the place. The fish was moist, tender and delicious! 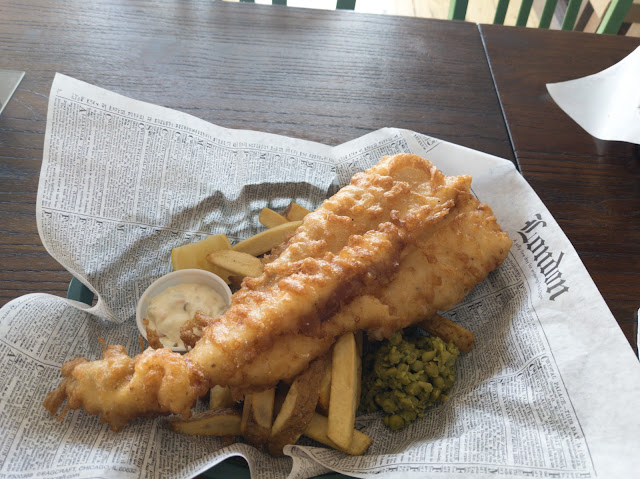 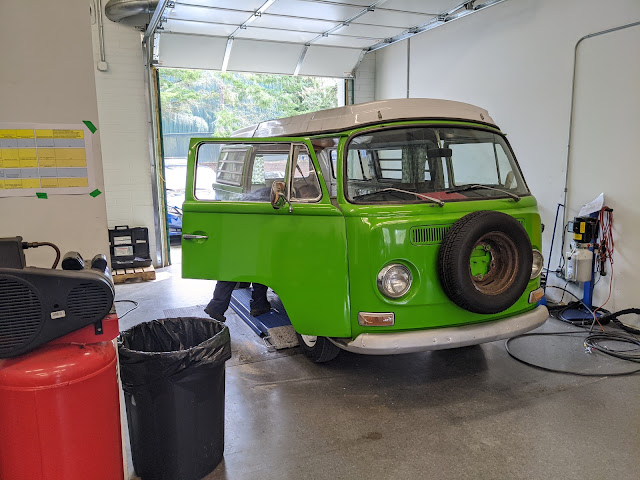 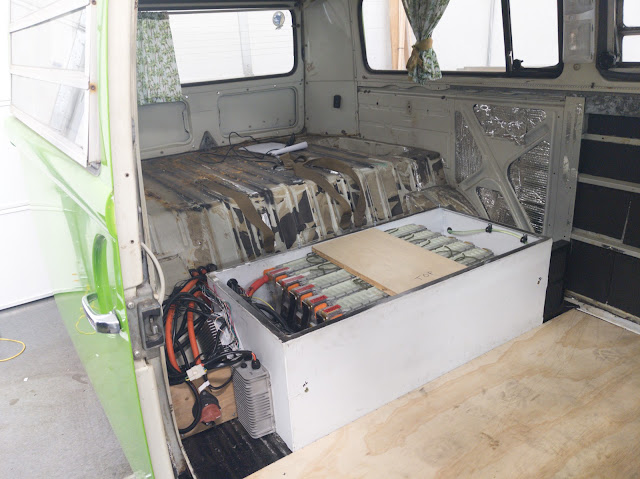 Now this one was in the process of being converted to a camper van, a relatively sedate one.  They had another van waiting on Tesla Model S motor and drive components that will enable launch mode.  Definitely something to see!

One of their bigger projects currently going is converting an entire van fleet to electric. Pac Westy rents vans for camping, excursions or whatever else you have a hankering to do on the Olympic Peninsula. They have full kitchen vans, simple sleepers with pop ups, (two stories!) and so on. One is done, the others are patiently waiting their turn.  Being located next door to EV Works definitely helps! 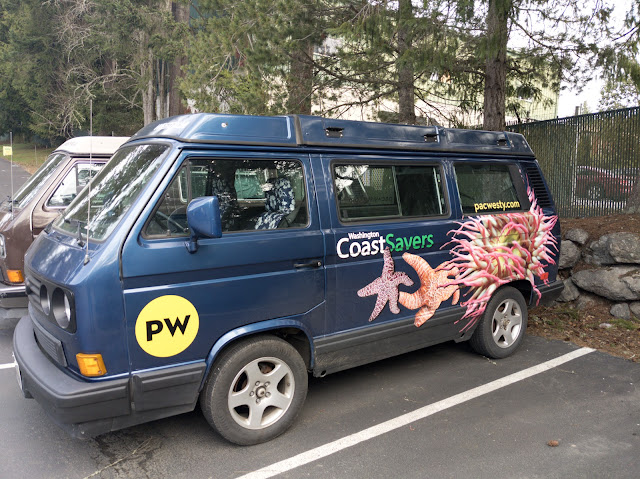 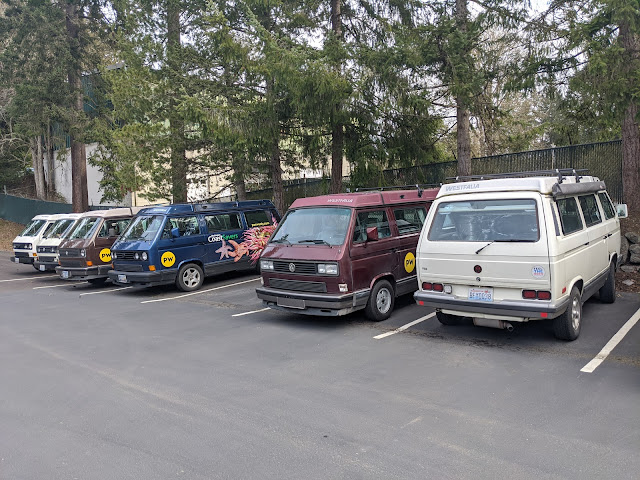 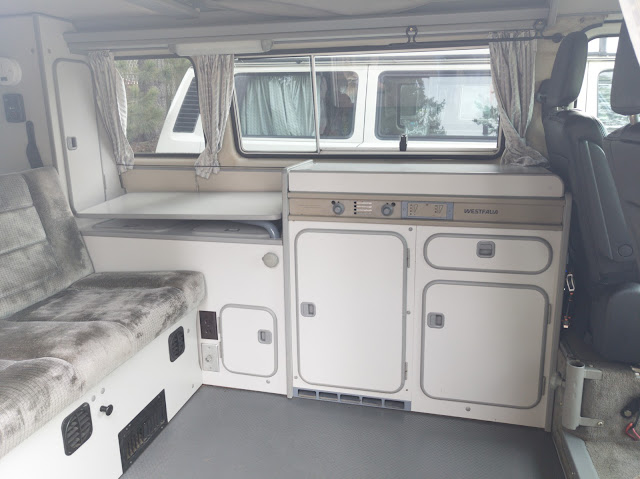 Interested in a weekend getaway?  https://pacwesty.com/ for more details.

Although decorated, Steve's old LEAF was unmistakable and actually looking pretty good considering the miles it has seen. 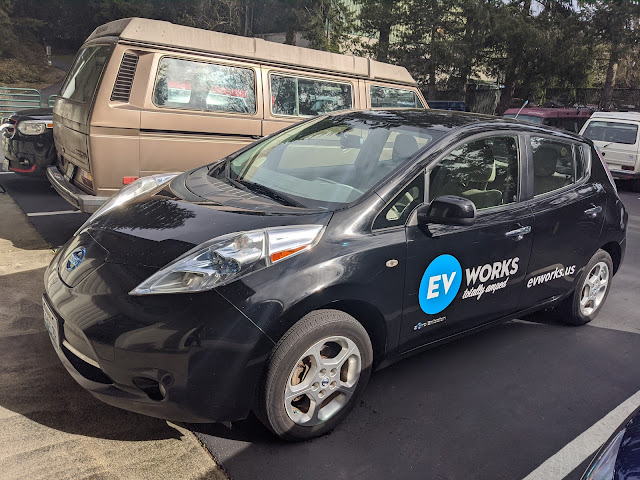 Yes that is my LEAF in the lower right corner!

I started the car and the familiarity came flooding back. Both the good; 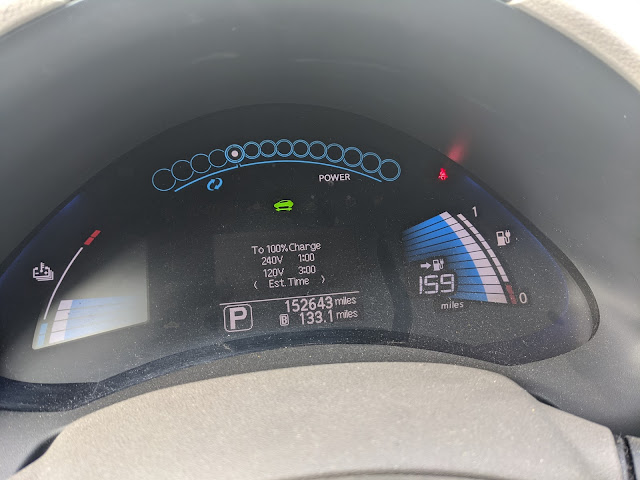 As we all know, the LEAF BMS is slow to react to changes. After several cycles,
the car started displaying 12 capacity bars. 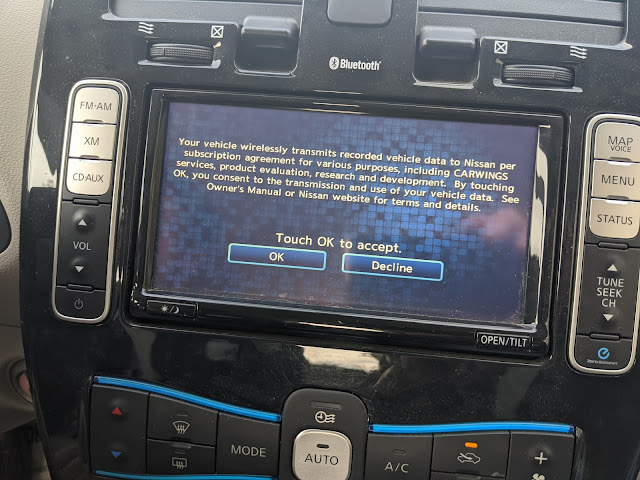 Doing my usual double shift, ECO bumped the GOM to 180 miles. So far so good! Now, I will say that the car drove differently than I remembered but then again, I'm used to driving a car with double the horsepower.  But other than the quiet hum of the motor, the car was completely silent. Not a buzz, a rattle, shimmy, or clink of any kind.  The car was still rock solid. This came as a surprise to me. I quickly realized why so many people were reluctant to give up their beloved LEAFs. Even with the degraded range, they were still nice cars to drive!

BYOB (Bring Your Own Battery)

Right now EV Works is sourcing their LEAF packs from salvage, auctions, etc. This means each pack currently coming in has a different cost which means I cannot give you a specific price for how much this is going to cost you to do this.

You could simply bring your own battery.  Installation, testing, and software upgrade is $1999.  They also offer all types of EV repairs, upgrades, etc. at $125 an hour.

For more information you can contact EV Works  www.ev-works.us     or Jay by email jdonnaway@pacific-mobility.com

EV Works has completed upgrades on a few more cars and it would be more but the challenge of getting 40 kwh and 62 kwh packs has been a challenge.  EV Rides LLC in Portland, Oregon has also completed its first Gen One 40 kwh upgrade so even if you aren't in the Pacific Northwest, keep your eyes open for a local shop doing the same thing. The technology to do this is out there and spreading fast!
Posted by DaveinOlyWA at 7:56 PM