I am currently collecting data from other Gen...uh...4? LEAFers with 40 and 62 kwh packs for a more balanced analysis of what we can expect to see long term.  Before 2018, I didn't have much interest since it wasn't till then that I wanted to keep any LEAF long term.  Even the bullet proof 30 kwh pack I had was only a considered cheap transportation purchase to use later to trade up. But despite the fact the 40 kwh had the range I would need,  it didn't have the buffer to allow better charge management which is why I am driving the Plus now.

Starting with the 40 kwh packs, we started seeing large adjustments in pack  numbers via LEAF Spy every 3 months.  I still don't have enough data to tell you where we will be in 5 years but the early patterns are quite consistent among drivers with various needs, living in vastly different climates experiencing various driving conditions.  The "climate" factor so well published including a Gen One degradation prediction chart based on one's city (quite accurate actually) simply didn't work. We have people in VERY hot areas performing very well comparatively with others in mild climates that normally favor batteries by a large margin.

Although there seems to be outliers, the vast majority of us are seeing rapid drops in numbers lasting 9-15 months.  7 to 10% loss during this time is normal and covers over 90% of people who bothered to submit their battery stats.  My pack was no different. Not only was I losing chunks on my adjustment, I was also seeing a decline of .01 or .02% 4-7 times a  week. "That" alone can add up to over 2% annually. Hx is almost always skyrocketing here. There have been a handful of people whose Hx has remained "reasonable" lower than 110% and all of them (keep in mind my "all" is a very small list due to people not posting their stats when ASKED!) were slightly above the curve.

But the  big chunks don't last. A new pattern emerges where the chunks lost in many cases, become chunks gained. Now we need to understand that realistically, this isn't possible but the circumstances of how these increases happen doesn't really allow us to blame instrumentation like the 24/30 kwh  packs which bounced up  and down on a near daily basis. So a huge number saw their numbers go up, others saw their adjustments get MUCH smaller or simply stop happening.  My guess is the adjustments are still  there but have nothing to report.  I also have daily records kept; something few others do.

Now, my Plus has only been in Phase 3 (I call  it  and...pretty much only I do) for just over a month.  In Phase 3, the downward trickle slows considerably.  Instead of seeing the .01 or .02% adjustments almost daily, they drop to almost once a week. In the chart below, to reduce the noise I only recorded ahr/SOH when the value changed.  Notice the Hx is also on the slow decline?  My adjustment happened during this period with a loss of .37% 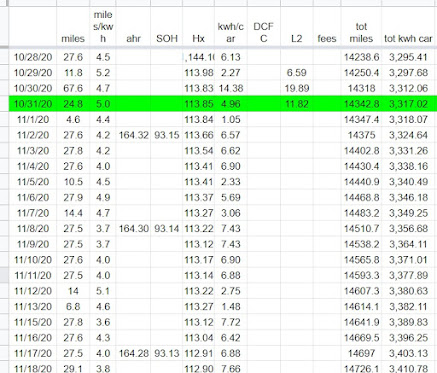 Notes; I have been on a SOC control kick.  Since I don't have NCTC any more, I have all but avoided DC charging for the most part and "maybe" that is contributing to the very slow numbers decline. I am running between 20-45% mostly with a few bumps to 65%.  Although it doesn't show here, the  longest day during the slow decline was 118 miles.  Another thing to consider is I am simply not driving all that much. With the new restrictions put in this week, it will be even less. I am  guessing neither the miles driven or lack of DC charging is a "significant" factor.  Below is my 40 kwh @ 15 months 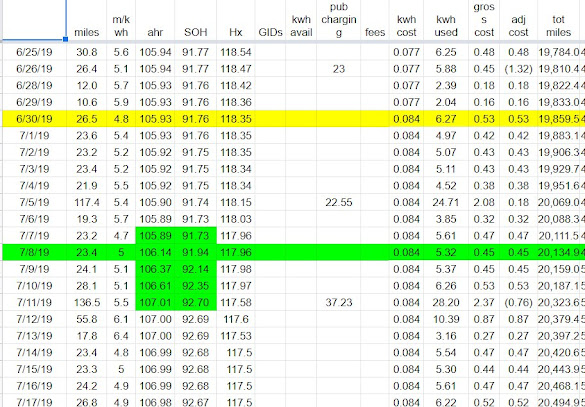 Notes; Full on Summer here and all the public charging is DC since I had NCTC at this time which is why I didn't break out separate columns for DC and AC.  Unlike my Plus, I BAKED the 40 several times. Free charging does that to me and it was also during a time when Central WA was blowing up with new stations so trips to Ellensburg and Yakima were a must. Yakima was during Summer and it was HOT! Leaving there, I took White Pass back to Centralia Webasto; a 162 mile trip which is quite the challenge on flat ground. This meant charging on DC (it was free for the opening!) until it stopped at 98% and topping off at an L2 in town; all done at near 100º heat. Fun times!

Point of comparison; One year

Factor in the mileage difference and its all but a dead heat. This is shocking to me. The charging/driving habits were as different as different can be. In the first year, my 2018 had a diet of 87% DC, My Plus only 55% DC with  nothing since August 24th.  The smaller pack charged to a higher level. I had 30 mins free so frequently charged until it stopped. So my SOC was higher, my pack a LOT hotter.

Now the  Plus has not done the road trips I had planned. The real test was going to be a rafting trip in Central OR followed by a visit to Bend OR then swinging back up thru Central WA back to Olympia in the dead of Summer but COVID derailed those plans.  The additional range along with the fact the pack doesn't heat up enough on the first charge made hitting 110º quite the challenge. My only experience with Rapidgate was during a run when leaving home under 10% SOC. I stopped in Castle Rock charging only 20 mins which was more than enough to get me where I was going in time (barely) then grabbed another 23 minute charge and went back to EA Lacey and charged at 55 KW  when I normally would have seen about 73 KW.  A slowdown? Yes... drastic? You decide.

Now we are in complete guess mode but based on the limited data submitted by other LEAFers over 2½ years on theirs, the trend is holding up. Below is two charts; the 2018 with 25,125 miles over 21 months then the Plus at just over a year. Data points taken every 1000 miles more or less (whatever the end of the day provided) and displays projected ahr/SOH @ 100,000 miles.  The 2018 has a wiggle in it due to a LEAF Spy recalibration of the SOH.

To read the chart, you need to look at the drops and how they compare with the upward slopes between the drops. You can see over time, the drops become smaller and the upward slope becomes greater. This indicates the rate of degradation slowing.

2018 40 kwh
Note; On the left side we see the drop being more than double the slow rises between adjustments. Then you see the slow rise with a jump up when I had my increase. After that you will notice just a slow rise. My last adjustment before the trade in was Zero. Its not like it didn't happen. It simply had nothing to say. If we extrapolate "part" of this chart taking the rate from my one year anniversary 2/16/19 to trade in 11/16/19. My projected SOH @ 100,000 miles would be 85.05%... A 12 bar LEAF.
But what if the bump up didn't happen (although its quite common) what if it was a zero bump? Then my projected SOH @ 100,000 miles would be 78.97% SOH. Easy to see why Nissan maintained the warranty degradation. I literally have no chance.  It also reveals a possible motive why Nissan is now using the 40 kwh pack to warranty 30 kwh packs.

2019 E Plus
When I talked about phases above, it was probably a bit of a head scratcher to you but after seeing this chart, it becomes clearer. Extrapolating this chart will be a lot less accurate since we have barely over half the data the 40 has and several projections using different points on the graph ranged from 60 to 74% SOH (July 1 and July 24)  So I took another view taking the degradation from the last adjustment to now and doubling it to get 81.57% which I have to think won't happen. Not doubling the rate puts me at 87.3% a more likely result.  Either way, you will know what I know when it happens.
Piling On The Miles...Or Not
I got my 2018 when I was still doing the inventory job so my driving was extreme. My first two adjustments I had done nearly 4500 miles on each. Realize the first adjustment, I had only had the car less than two months. Needless to say, I DC'd a lot. Remember, it was 87% DC and that includes a few stretches of a few months when I did no home charging.
2018 Adjustments; Apr/Jul/Oct/Jan
#1; -0.67% SOH on 4499.0 miles  total 1.30% drop
#2; -1.31% SOH on 4243.2 miles total 1.87% drop
#3; -1.20% SOH on 3254.8 miles total 1.71% drop
#4; -1.55% SOH on 3054.0 miles total 1.73% drop
#5; -0.92% SOH on 2637.8 miles total 1.07% drop
#6;+0.97% SOH on 2642.9 miles total 0.72% rise
#7; zero change  on 3532.7 miles total 0.40% drop
The S Plus showed up 4 months before COVID hit and I still had NCTC  till February along with a $250 EVgo credit.
2019 Plus adjustments; Jan/Apr/Jul/Oct
#1; -2.35% SOH on 3267.1 miles total 2.82% drop
#2; -1.29% SOH on 3265.1 miles total 1.61% drop
#3; -1.13% SOH on 4123.2 miles total 1.59% drop
#4; -0.37% SOH on 2898.0 miles total 0.49% drop
Notes; Adjustment 3 covered my labor share assignment when I was working at a different facility. It was just under 100 miles roundtrip 4 days a week for 6 weeks. It was "profitable" I banked $215 a week in untaxed travel pay all while using up my $250 EVgo credit.
About halfway between #3 and #4 is when I went to all level 2 charging and a lot less driving. The totals look ok but that is because school was out and my Son and I could take any day of the week for road trips so lot of "short" 200-300 miles trips were in there. Now that school is in, the only day we have to really do any traveling is Saturday which is just about my least convenient day.
The 2018 bounced around quite a bit so hard to discern any real trends until the very end but the Plus is very predictable. The "total" you see in the last column is the adjustment plus the daily drops.
Conclusions
Sorry... way too early to tell with any certainty which is why more data is important to the process.  This means several LEAF Spy data points spanning years.  Many 2018's will be hitting year 4 in the next few months and those data points are valuable but less so if we don't have your 2½ year data or your 2 year data.  I am guessing you figured out by now that this post was less a one year review and more a plea for more battery data. The MANY points mentioned briefly I will delve into more at a later date and that includes why charge management is more important than you think. I will also have more insights to my "keep it low" SOC experiment which will end around June. Hopefully by then the vaccine will be available and being rejected by millions (a sad and unavoidable fact I'm afraid) but traveling in relative safety will be an option for the more sensible people among us.
Posted by DaveinOlyWA at 12:39 PM