To Pump Or Not To Pump?

A Facebook post on one of the LEAF groups asking about the low tire pressure symbol on the dash. More than a dozen chimed in that they also saw it as well and its Winter which is a bit concerning. Like all dash warnings, they come on when the situation is quite dire. Since Nissan already low balls the tire pressure recommendation is it imperative to check those pressures EVERY time you drive the car.

The new LEAFs makes it easy. Starting in 2018, Nissan started listing individual pressures on each wheel and these are self registering so no need to keep track of the changes in position when rotating tires.  Like all TPMS systems, it takes a few seconds for the tires to measure the pressure but this is something you should do before traveling too far. 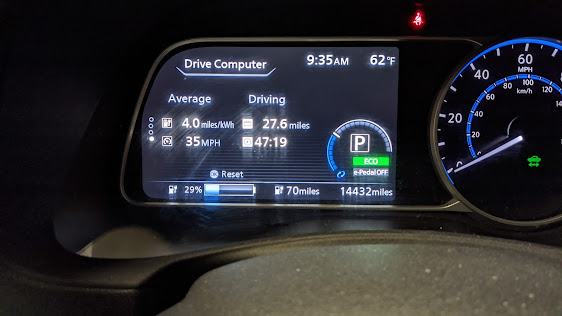 To access this menu option, use the steering wheel buttons to scroll horizontally thru the options. The one you are looking for is the one just left of the options menu or the "Information" screen.  Notice the vertical dots on the left side of the display? Those represent how many subcategories are contained within that menu.

The information button has 4 subcategories and two of them should be used frequently. The Trip computer is my default screen which makes checking tire pressures that much easier since its just a single click up to see the TPMS screen 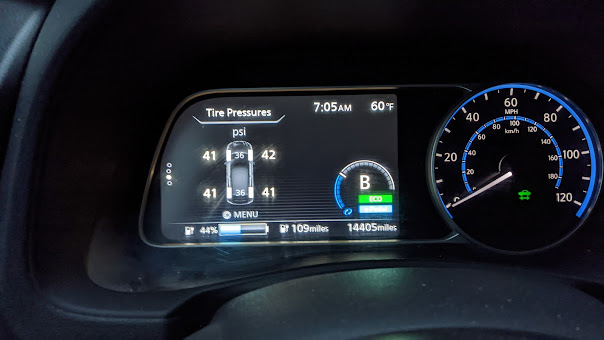 Notice we are now on subcategory "3"
Why is it important to check pressures right away? Tire pressures should be set during the coldest part of the day. That is hardly convenient but the general idea is to check them before driving too far because tires heat up unevenly.  The heating of the tires is directly due to flex. The more the tires flex, the more energy is robbed from the motive force used to get you down the road so your efficiency drops. Well, that energy has to go somewhere and it goes two places; degrading the tire and heating up the air inside it. Obviously, the goal here is less flex. This means longer tire wear and better range but there are caveats.  A less flexible tire has less traction. In most cases, you will be fine unless you are a tailgater or speeder, or...something.
So balance is the key. Many choose the Nissan recommendation of 36 PSI and this is the least efficient option. You will have less tire life and lower range.  Others choose the maximum tire pressure listed on the sidewall; typically 44 PSI and this gives you the best tire life, the best range, and the least traction.
So what's the best option?  That is for you to choose. But this is also why I am writing this.  The #1 cause of tire failure is low pressure. The ideology that a tire will "pop" if inflated too much is actually quite laughable. Those days all but ended when steel belted radials came along.
So the real danger happens when you stray outside the range set above; below 36 PSI or over 44 PSI. Since we are talking "cold" pressure, seeing 46 or even 47 PSI on your tires after an hour of timing laps on a roundabout is not only normal but expected. Its all about the law of reality AKA Physics.
So we need to be not too low or not too high.  So are we looking at the lazy way or the smart, diligent and much harder way?
Well, the easy way is to set it and forget it. We really only need to adjust when the temperature changes so if you haven't already, now is the time.  We really only need to do this twice a year. The pressure inside the tires changes roughly one PSI for every 10ºF.  In the northern tier, maybe 3X a year.
Lowballing It
If 36 is your lucky number, you can make it work but it is a lot more work.  The problem with living on the edge is you have to be diligent...half the time....and you picked the edge that should get 100% of the attention.  Tires work by creating pressure inside that holds the tire to the wheel by its bead. That tire pressure maintains the bead and only a minimal amount of air escapes and can take several days if not weeks before we notice it but it WILL leak.... PERIOD.  So checking the pressures EVERY time you drive the car is very important and luckily we now have a process that takes 2 seconds (if you are slow) to check them.  Of course, the lower the tire pressure, the lower the integrity of the bead and the faster air leaks out.  The #1 cause of tire failure (as mentioned above) is...well, the #1 "avoidable" cause of tire failure is low tire pressure resulting in a bead that loses its integrity easier over bumps, etc.
Bottom line; expect to boost the pressure frequently.
Smartpressuring
44 PSI may seem like living on the edge but its not. Again, driving will push the pressure above 44 PSI but that is ok. Tire engineers already accounted for that. Now, just because tires don't have the "this is not a toy, do not place over mouth and nose or suffocation might result" warning doesn't mean they have the same BS legal ramifications to contend with. They do so the "maximum" tire pressure listing is a very very VERY safe thing to do.
as mentioned above, tires leak. Some leak slowly, some leak faster but they all leak. Now everyone here will contend that theirs don't leak because they have had a set of tires where they set the pressure one time and never went beyond the "look to see if one is lower than the other" method for the rest of that tire's life. FYI; most of these people also complained how bad their tire life was as well. Coincidence? Who knows...
Ok so just because there has never been a recorded incidence or air sneaking "IN" to an inflated tire doesn't necessarily mean it couldn't happen but as I understand it; the circumstances that would be needed is quite rare here on Earth. This means "one" car might have an issue but the rest of us should be fine.
So yeah, even if in the "44" crowd, occasional airing up on the tires is needed. I wish I could say that I have added air less than a half dozen times since the early 90's (when tire pressure became important to me) but I didn't actually start tracking it until 2004 but discounting major intrusions of the screw variety, I have only added air "off schedule"  13 times and all 13 of those times was before I got my 40 kwh in February 2018.  But that was when I had my under 100 mile LEAF and my "trigger" point was 43 PSI.  Nowadays, I don't adjust until it gets to 40 PSI which is one reason why I haven't. I do adjust twice a year to account for Summer and Winter temperature changes but that is all. I guess my range concerns have "diminished"  😎

Ever wonder why birds fly in formation?  Its all about efficiency. If you had to flap your arms for weeks at a time, you would understand.  The lead bird faces the most resistance due to air currents.  When breaking that resistance, the bird creates a wake of lower air pressure where birds following are able to work much less to follow along.  Each bird takes its turn leading so no one isover fatigued and the entire group benefits.

Your tires also see this imbalance. Your front tires guides your car. This means all the inertia your car has is applied to the tire every time you change direction (which in the case of the typical WA freeway driver is every .4 seconds!) which means they wear out faster. They are also the drive wheels and as we know, the new LEAF will spin them tires like crazy. So I would be amiss if rotation was not mentioned.  To get the best tire life, you should rotate your tires regularly.

So the only real question is how often? The answer is "often enough to maximize tire wear but not often enough to be an inconvenience"  Now what this doesn't mean is rotate them when its convenient. It means setting a schedule based on something.  The easiest way is by mileage interval. The LEAF even has a maintenance setting where you can set reminders to rotate when a certain mileage is obtained.

Miles are only equal in length. The wear on the tires is not. Freeway driving provides a lot less wear on the tires.  A good example would be Steve Marsh; the "100,000 Mile LEAFer" whose OEM tires lasted him over 70,000 miles! And he kept his tire pressures between 38 and 39 PSI so not even an "extremer"

So based on that; in Summer, I rotate every 6,000 miles due to a MUCH greater portion of freeway driving due to road tripping. In Winter, its more around town driving which wears out tires faster so it 4,000 miles so it averages to 5,000 miles a year.  How you do it is up to you but do it!