281 is the GID count of a "seeable" capacity on a Nissan LEAF traction battery pack. Each GID is supposed to represent 80 Watt/hours. There is a total of 300 GIDs to make the 24 Kwh battery pack. Now the LEAF actually drops the connection to the traction pack at around 2% leaving about 22 Kwh or about 91.6% of the true pack capacity.  Now because a battery charge is a chemical reaction whose properties can change with temperature like any chemical reaction; actually charging to that top target of 93.6 % is an approximation that can be affected by hot Summer time temperatures. the LEAF's BMS may throttle back the charge slightly to prevent any possibility of overcharging and the resultant permanent capacity loss so the top end is typically in the 90-91% range for me.

Now the accepted charging efficiency from wall to battery is about 85% and if each GID was 80 watt/hours then it should take about  94 watt/hours to get the GID there but that is the rub. 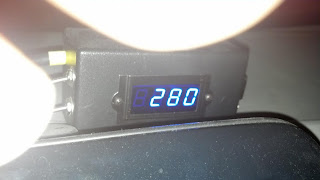 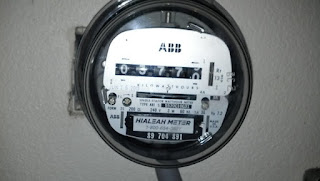 Now, I was at 281 GID and it was a bit of a surprise (was 275 yesterday) so I went and got my phone to snap a pix. two minutes later I returned and it was 280 (should have turned off the radio!)


So despite the SOC meter saying i gained 254 GID, if using the 80 watt hour parameter and the 85% charging efficiency number i come up with 213 GIDs put back in the pack. Now that would make sense since I drove 64.8 miles @ 4 miles/kwh. with 27 GID left that would take me about 6 miles for total of 70-71 miles of range in last nights near freezing conditions. The remainder of the power could be attributed to occasional defrost used to clear the windows.

Now, before the weather turned cold, my GID count ran from 268-272  with an occasional bump to 275 during most of the past Summer representing a 2-3% loss.  If we compare the LEAF's performance to last winter, it does appear to have lost a bit of range but not really too much, maybe only a few miles.  With the SOC meter, it does lower the range anxiety a bit since we know that Turtle happens about 7 GID so there was still 20 GID "left in the tank"

Either way; the LEAF is headed to Centrailia again this morning.  will report back tomorrow and the recharge amount!
Posted by DaveinOlyWA at 9:30 AM