Saturday was a day of goodbyes. It started first thing with Mark leaving for his flight by 7 AM, Chelsea had flew out late the night before. Our group was fading away...

As luck would have it, Darrel and I were the last to leave with flight times in the late afternoon which gave us a chance to do some more shopping and exploring. 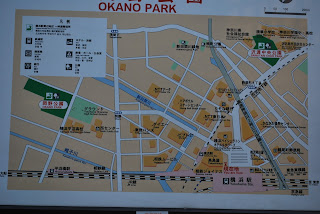 OK, so where do we go?? Decisions, decisions!

Actually the one destination that had eluded us was Takashimaya a HUGE department store 9 stories high.  (7 above ground, 2 below)  Unlike the rest of the mall which was open till 11 PM or later, Takashimaya closed early and we just never made it back to the hotel in time.  So, we decided that would be #1 target.

So we made the long nearly whole block journey across the courtyard to the front door only to find out that it did not list its hours of operation on the door but there was already a handful of people sitting patiently so we thought "Must be soon!"  It was just before 9 AM. Well, 9 came and went and dozens of workers inside scurried about getting ready for the day... 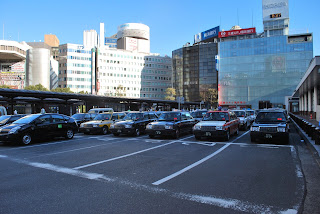 Right behind us was the Yokohama Air Terminal (no airport here but does have connections to every form of travel you can imagine. The pix in part 4 was basically under this spot) where taxi's wait patiently for customers getting off the train or subway or bus or... 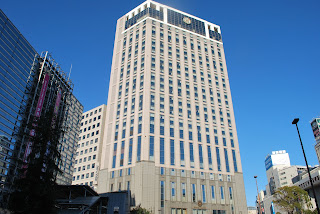 Here is Takashimaya on the left, the Sheraton on the right 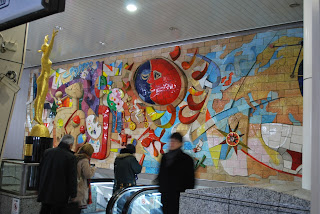 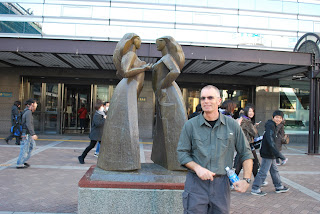 Here is Darrel posing with "the Ladies" in from of Takashimaya

Then right at 9:30, some activity.  A store worker unlocked the front doors but another worker immediately wrapped a red ribbon over the handles.  The level of activity inside increased.  So store is just about ready! I had heard about Japanese promptness so figured now its time!   but, then they moved off. There were now dozens of people waiting and no one made a move for the door. So we waited...and waited...

Finally at 10 minutes to 10 AM, an army of store personal marched up in file and stopped in front of the doors. The lady who had unlocked the doors went to each and removed the ribbons. Then called her "army" to attention. There was a short speech and what I took to be a prayer and each person went to a door (there was about 10 of them) and stood at attention. At what I am guessing to be precisely 10 AM sharp, all 10 doors were opened at exactly the same time and we were welcomed inside.

True to its reputation, Takashimaya had EVERYTHING! or just about.  I spent a fortune here too but it was worth it.

Finally it was time to go back to the hotel and pack up.  We rode the bus to Narita and spent SEVERAL hours in the United Air Lounge eating and drinking for free. They had some pretty decent Sushi there as well.  Finally I bid Darrel farewell, headed to my gate and boarded the plane back to Seattle.

Thank you Nissan for the trip. It was very enlightening on so many different levels.  The chance to experience a small part of the Japanese culture gave me a much greater understanding of why it was the Japanese who are first to town with an EV. (Tesla too...)

There I saw thousands upon thousands of bikes literally parked on nearly every corner. I mentioned before about the trust bicyclists have with their bus driver counterparts. Around my town, if a car gets within 5 feet of me, I am freaking out. In Japan with smaller streets, it was common to have a bus and biker less than 2 feet apart. Scary!! but they took it in stride. There is a trust there that we Americans cant even begin to understand. 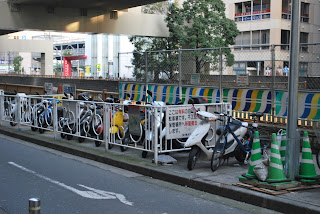 But of the thousands of bikes I saw, I dont think I saw even a dozen bike locks. Amazing!  "Toshi", one of our Nissan tour guides stated that when you buy a bike, its registered to you so if its lost or stolen, recovery is easy. Bike theft is very rare here.

Another thing that is common is people wearing surgical masks. Now, there are two reasons for this. The one is to prevent spreading of germs. IOW, people actually care not to get someone else sick.  Nice! but the other reason some wear them is to keep from getting sick.  There is sense of commitment in Japan where even missing one day of work or school is a very bad thing. This all goes back to promptness and reliability.  A recent study showed that the average American worker was late as much as 6-12 times a year. Japanese are much more committed to being on time and its no wonder that most trains, buses and subways run every 10-20 minutes.

After the Fukushima  Disaster, there were many reports of Japanese going to extreme lengths to reduce their electricity usage to help stabilize the grid. Another example of how the Japanese where small personal sacrifices are willingly offered for the greater good.

All these examples are reasons EVs are much more successful in Japan than the United States.  They quickly realized that not importing oil to burn gas in cars is a good thing in so many different ways.

Before the trip, there were a lot of questions we wanted to know. This trip is very much just an introduction and some insight to Nissan's ways and what they go thru to effect the changes we all want.  This trip is step one of what I hope will be a long and fruitful journey.
Posted by DaveinOlyWA at 10:17 AM