This Week in EV Bay; Should March 2013 Be Considered The Watershed Month of EV Adoption?

On the 2nd day of April, 2013, early morning announcements will create a more than a ripple in the automotive industry.  Early reports stating that over  6,000 plug ins were sold in the month of March including a record of 2236 LEAFs for the middle class and over 2100 Tesla's for the "not so middle" class.  Volt sales were somewhat lower at just under 1500 units but still respectable. Some speculate that announcements concerning the 2014 Volt has caused some to wait for the newer model.

Later in the day, it became obvious that March 2013 was simply "Car Month".  Every brand was up with several notables. Chrysler had their largest month since 2007, Nissan had its largest month EVER.  Quick note on that. 188 LEAFs were sold in the Western WA district making it #1 for the Nissan nameplate. This happening in a month when Nissan set sales records makes the achievement that much more impressive.  And there is no signs of slowing as of yet.  Tesla is still busy catching up with a 3 year backlog and Nissan has not completed stocking their dealerships of 2013's yet so very strong sales should continue for the foreseeable future.  All of a sudden, Obama's dream of a million EVs on the road is starting to look reachable.

What is not keeping pace is public charging. Despite the announcement in Oct, 2012 from Blink concerning a half dozen DCFC's for the Seattle area, only a few have been installed to this point.  I will say that so far, the Fife station has been rock solid and has worked perfectly for me every time I have used it. It does fill a very vital link for traveling regionally in the Puget Sound Region but I liken it to being an Oasis in the Desert. Too many stories of travelers found dead a half mile from the watering hole comes to mind here.  Last night, I was working in Auburn and had to use the station twice. Luckily, there was no issue. If there had been, it would have not been a late night. It would have been morning (even with a 15 minute boost, I got home at 3 AM)

Now, putting in chargers has proved to be a much tougher challenge than anyone has realized. Whether its a question of legislation to pave the way or what, I really dont know. Guessing the reasons are highly individualized based on each specific situation. Now when EVs were moving like molasses in January, it was ok to talk about how to get these charging stations in the ground because we had time, but now we have run out of time and there has been very little progress made towards getting charged while out and about.  Wish I knew how to rush them a bit but until then, there are still things we can do.

ICEing  is a problem that is being addressed but since its not law quite yet, not too late to put a bug in the ear of your representative! But things are looking good on that front.

The Golden Rule.  Too many incidences reported of people camping out at charging stations. One person reported that they were rushing to make an appointment and someone was at a quick charge station topping off.  The person advised that they only needed 10 minutes of charge and were rushed for time and asked if they could use the station and the other person relented but not before a somewhat unpleasant conversation was exchanged. Well, maybe we need to let someone else be the "bad guy".  I think Blink should take it on. (Wish AV had dual head chargers!)

What if Blink set a time limit of 20 minutes to charge?  with the other head already queued up, they would have to wait until the other person was done if they wanted to continue their charge. If there is not another person queued up. They simply restart the session.  In Yokohama, the free chargers Nissan provided "might" have had a 15 minute charging limit. Cant read Japanese but a "15" on a stop watch face seems pretty intuitive. 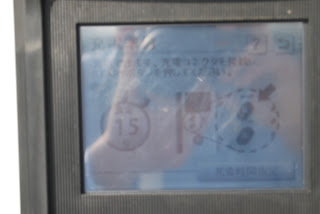 Hard to see in the picture (I dont have the option to change the size...pitfalls of a free blog account I think)  but next to the clock on the right is a picture of two cars with a circular motion suggesting that if 15 minutes is not enough time, you can get back in line again if you need to.  This is something we need to adopt but unlike Japan (where the culture allows this kind of respect and sharing) unless we have some mechanism in place, it wont happen.

Because the DCFCs are still too few and too far between and too unreliable, its easy to understand someone who feels lucky that they found a working station and their reluctance to let it go to chance their luck that the next one down the road will work as well but we do have to realize that we are all in this together.  We have to help each other out and if it means letting someone get a 10 minute boost, then let them!