What Happens When All Your Stuff Looks Alike? The Oops Of The Decade!

A lot of words about interchangeability of  LEAF packs from small to bigger and how difficult it "could" be but apparently if you have the right equipment and applicable authorizations it can be so easy that it could be done nearly effortlessly. In fact so easily that it could (and was) done without any intent to do so. At least in one direction!

Recently a LEAFer in Phoenix, Sam having lost the 4 bars needed for a warranty exchange, received his LEAF back and guess what??  Are you sitting down?  I would take a few deep breaths first before continuing...


His 30 kwh battery pack was accidentally replaced with a 24 kwh pack! 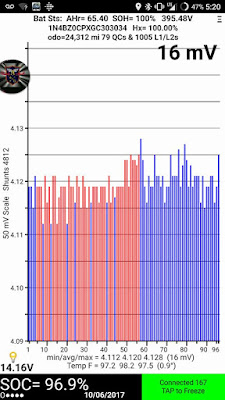 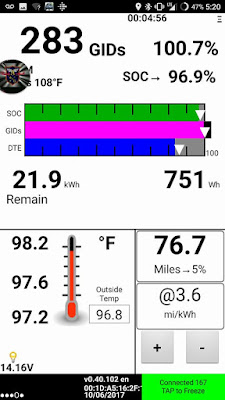 The above is not a typo.  A 2016 LEAF SL with a 30 kwh pack had a 24 kwh pack installed as a warranty replacement and apparently the process is so similar that the tech never realized it was the wrong size pack!

This very well could mean that a lot of the excuses used for not being able to do this swap are simply ONLY due to Nissan's unwillingness to grant permission to do this and nothing more.

In 2015 a Nissan Engineer attending a European Car Show admitted an upgrade from 24 kwh to 30 kwh was technically possible but would not elaborate.

Now there is a question of direction here. Since packs degrade, accepting a smaller pack than what the BMS was designed for is a given.  The BMS simply adjusts for the lesser capacity so this in no way guarantees that the same thing would happen when putting a bigger pack in place of a smaller pack, right?

So before we all start calling our lawyers crying about wanting the bigger pack, this needs to be examined first. But its becoming apparent that the connections at least between the 24 kwh packs and 30 kwh packs are pretty close! :)

FYI; It was only after being armed with data collected from others that Sam was able to convince the dealership to look into a possible mix up and sure enough, he now has an appointment to get a 30 kwh pack  A MONTH LATER!

I have heard of loaner programs before but this is a new one on me!

The benefits of Social Media!

Apparently DIYers in Russia did the downsize and found it to be a pretty easy thing to do but the upsize was fraught with problem after problem and could only be done by swapping VCM from 30 kwh LEAF into the 24 kwh LEAF.

FYI; Nissan sells the VCM for the Nismo package that provides stronger power profile for $1385. Wondering if it also recognizes longer range. There is a mention of that in a very roundabout way but simply could mean just a stronger regen profile...

Ok, apparently the 30 kwh pack WILL NOT work in any way in 24 kwh LEAF without a matching VCM swap.  A bit of lost in translation or something I guess. So I did a search at LEAF parts site and did not find a "VCM" but did find this

Now, have no idea if this is the part that is needed and guessing even if it was, it still needs to be programmed so likely other equipment and codes are still needed to do a swap.  Still looking to be an expensive DIY project but also can see it being a viable Aftermarket Product although not sure that 30 kwh will warrant the price needed to make a profit.

**Epilogue; The Saga of Sam's Shrinking Pack has come to an end. Today Sam finally received his LEAF AND 30 kwh replacement pack.  So all is back to normal, Sam is a happy camper and is now looking to take out a loan in order to pay for the gas on the loaner he had while the dealership got everything straightened out.
Posted by DaveinOlyWA at 7:13 AM