We all know E-Pedal slows the car dramatically faster than B mode does although B mode does a pretty good job as well, just not quite as fast. If there is a slight upwards slope to the road, B mode will slow the LEAF to nearly a complete stop. But creep will allow the car to continue to... well, creep.   Sadly, even E-Pedal has creep enabled.  Creep power is small, roughly 200ish watts or so but even at a standstill, E-Pedal is still using this 200 watts just like D mode, B mode, and likely reverse (You will have to check on that) but at least "friction braking" still brings the car to a full stop.

I wrote in my blog back in March 2018 that I was able to hit 60 KW in regen. At the time I wondered why I could not charge at that rate (Note; The charge restriction is obviously a programmed restriction by Nissan illustrated by "Rapidgate" issue that plagues all 40 and 62 kwh North American LEAFs) So I already knew going in that the reason E-Pedal slows the car much faster is because it regen's on a completely different level.  We also need to realize that regen is AC power,  Fast charge is DC so two completely different systems at work.  FYI; DC is a direct dump into the battery while AC must be converted thru the charger before hitting the battery. 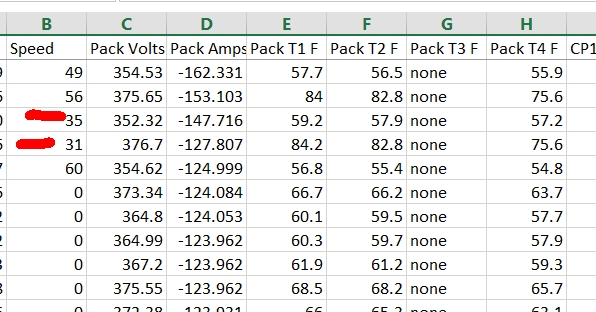 EDIT
It does look like the easiest method for efficiency is B mode for most driving using E Pedal for rapid slowdowns and full stops.  This does not change the fact that E Pedal is still a dream come true in stop and go traffic!
There was still very little efficiency differences but I found B mode to simply be easier to not slow down too rapidly.  Many times a situation would develop in front of me and my knee jerk reaction was to completely lift my foot from the accelerator rapidly slowing in E Pedal. Nearly every time, it was too much slowing.  B Eco seemed to be a good compromise. D Eco proved to be too unresponsive to deceleration much more situations I tended to see.
Eventually the driving style that seemed to work the best and the one I have since adopted is B Eco for all driving scenarios that are not full stops and go.  I will still engage E Pedal when an expected stop is suspected and at that point, I will return to B Eco within a few seconds or continue to a stop in E Pedal.  Over the long term, this appeared to give me a .1 - .2 miles/kwh advantage. I hesitate to say that because the results were inconsistent but against the  average of the same time period taken in both 2018 and 2019, the numbers did nudge upwards.
Since D and B do provide a different driving feel, it really becomes up to the driver's preference. I think if I lived in an area with less traffic congestion, I might prefer D as well but I live in the land where camping in the left lane one mph over the speed limit is all too common.
Finally
What mode is best? Answer; ALL OF THEM!
That's what they are there for. Changing driving conditions means each mode has a role to play.  Now, we can be lazy, simply pick one and stick to it. I choose to constantly shift from D, B, E Pedal and even N depending on the road (and cars) in front of me.
Am I doing it better? Well, I think I am above the efficiency curve but it is enough to justify my actions?  The answer is dependent upon your opinion.  Its your car so your choice. I do say that is does make me more aware of the traffic conditions and probably makes me a safer driver.
Posted by DaveinOlyWA at 8:52 AM