Day two of the trip started early. In my case, it was VERY early. With a 17 hour time difference, I was up at 4 AM and could not go back to sleep. With less than 3 hours of sleep, I was hoping I would last thru the day. I puttered around the room unpacking and doing the things I had not time for with my late arrival Tuesday night until the 2nd Floor "Compass" Dining Room opened for Breakfast at 6 AM.

I went down promptly at 6 and spent two full hours there eating and getting to know my companions a bit better.

Then first thing on the agenda was boarding the bus to Nissan's main assembly plant in Oppama.  Here, Nissan manufactured the LEAF along with several other models but not side by side.  The build order is based on customer orders and is built in the order received.  A look down the line would show the different models intermingled on the line. Rarely would two of the same models be consecutive on the line and if that were to happen, the odds of both having the same trim package was very rare.  This created a huge logistical challenge of having the exact right part matching up with the exact right car. Each vehicle had a sheet complete with all options and the customers name taped to it to reduce any confusion 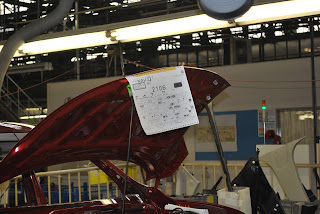 In fact, the one thing that was very clear in the plant tour was the level of coordination in the plant between the workers, the line and the multitude of vendors.  The plant puts out a vehicle in just over 70 seconds during its two shift 6 day a week operation.  Despite being small in size compared to other auto manufacturing plants of its volume, they are still able to maintain a high level of efficiency with the limited space while implementing continuous improvement which they called "Douki-Seisan" method. It is just one part (a very important part) of NPW (Nissan Production Way) that has brought the company from near bankruptcy less than 15 years ago to its current position as a global leader in the automotive industry.

After the order comes in, the sheet metal stamping plant punches out the various body components 4 days in advance. The components are then coated, painted, etc. and then shipped to the factory.  They take up so much space that they simply cannot build them farther ahead of time.  The rest of the components that go into the car that must be built from scratch have no more than a two day lead time.  Here is a LEAF that has already gone thru several assembly stations 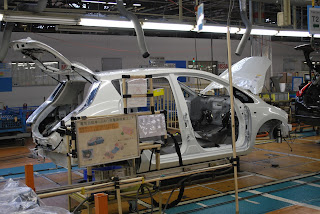 The line is supplied in lots of 4 orders at a time by an automated system run by "Carrybees" which are guided electronic robot trains.  They are programmed to supply the right part to the right station at the right time.  I watched one as it dropped off 4 trays filled with interior door trim to a station then make its way back to an automated storage rack system where it picked up its next 4 components and then it headed off to a different station with a different set of parts. All done without any human intervention at all.  Pretty cool! Now, they all play music and sounds more like an ice cream truck than a freight train but they still get the job done! 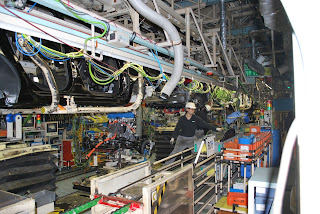 
The only component that must be built farther in advance than the 4 days is the LEAF battery pack. The battery pack is installed at the gas tank installation station and is a quick and simple 4 bolt procedure to install with a few cables to attach. 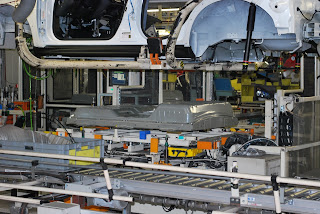 Battery pack being lifted into place for install into a LEAF

After the Oppama tour, we had lunch at a wonderful Japanese Garden restaurant where ate in a separate hut in the middle of a garden! 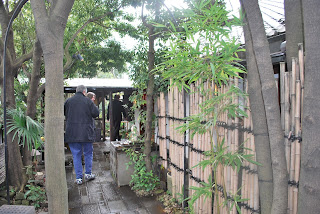 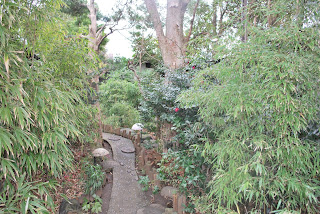 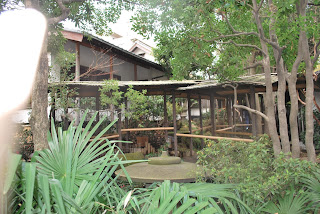 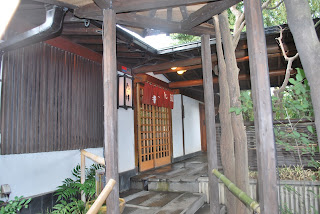 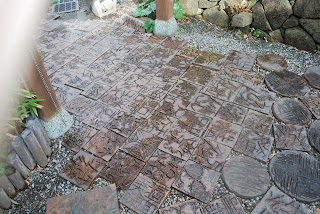 After lunch, it was back on the bus to Zama and the AESC Battery plant. Here, pictures were restricted for the most part so not so much to show you here but as we arrived, I was very pleased to see a portable power supply being used as backup power and its power supply was two Nissan LEAF battery packs! (or at least something that looked like them) with room to add three more. I did snap a pix of it from the bus, but the pictures did not turn out unfortunately. Hoping that someone else grabbed a pix but still very cool to see LEAF pack in in action as a great secondary use!

We were met by the AESC President , Shouichi Matsumoto who was our tour guide. In a nutshell, the LEAF battery pack contains modules built by AESC. The modules are built by layering sheets of Cathode material(LiMn2O4) , insulator, anode material (LiNiO2) in a flat layer until they resemble a stack of paper. Each layer is actually thinner than paper. after 69 layers are put together, they are packaged and sealed on 3 sides then taken to a room devoid of moisture (very dry here with dew point setting in the neighborhood of  -30º C and filled with electrolyte. Each module is then sealed,  then taken to a curing room where they will sit for several weeks. When cured the modules become brick hard.  This helps create the uniformity within the module that insures long life operation.

The room where the modules were being cured was huge and full of modules. Considering the current high price of Li batts, I was thinking that the value of that room could rival some of the rooms at Ft. Knox!

While on the tour we were shown the older module and a new module that will be going into the 2013 LEAFs. They went from a solid case to a much lighter case that provided ventilation.  Although they claimed the change was for weight reduction only, the new casing did seem to provide a bit more room between the modules which could allow air flow. Others at Nissan later stated that liquid cooling would never be considered but chilled forced air was being looked at 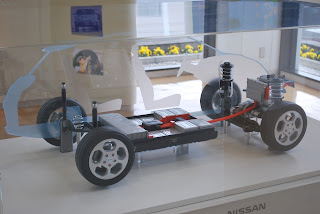 After the battery plant tour we visited the Nissan Heritage Collection where we got to see nearly every vehicle Nissan has ever made including their first EV and no it was not what you think. Right after World War Two, gasoline was in very short supply in Japan so Nissan built and sold its first EV a 1947 Tama Town Car 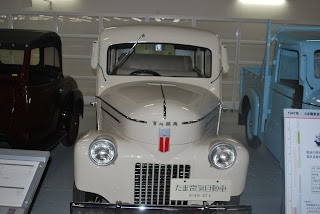 As a community leader, Nissan also provided various vehicles for special events and holidays. Some were very colorful 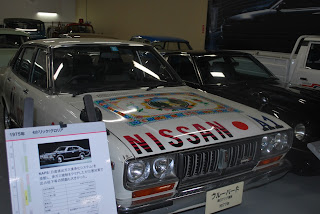 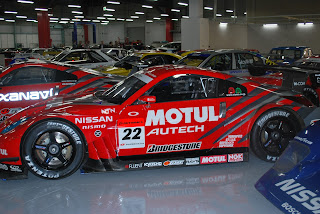 oh and since some of you might have guessed this car as Nissan's first EV, its only fair that we show that one too 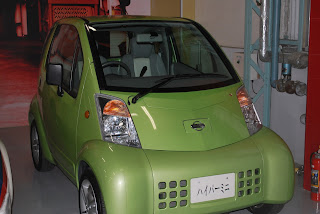 Back on the bus again! This time to Nissan World Headquarters back in Yokohama just a few miles from the hotel. Here we met Andy Palmer and had a great buffet dinner on the top floor. 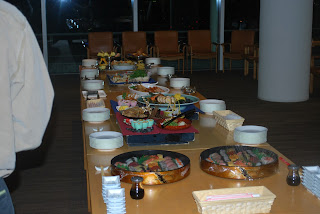 And before you ask, No... the food actually tasted WAAAAY better than it looked! 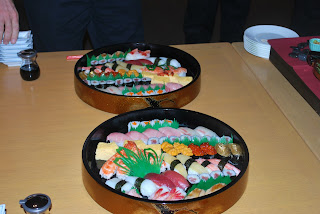 After dinner it was back to where we had started the day a mere 13 hours earlier. Despite the very long day, lack of sleep, major jet lag. I never felt tired... can't imagine why!

To be continued
Posted by DaveinOlyWA at 6:53 PM