Why Is Our Power Bill So High?

I work for an inventory company. I am sure you have seen us before. An army of people in the store with small computers strapped to our waists beeping away counting the product on the shelves. That is how the company makes its money. But we actually do all kinds of stuff.  One of the things I do is what is called "Asset Protection" survey.  I simply observe and record how well a business is protecting their inventory. IOW, I record the positions and conditions of things like monitors, cameras, fire controls and burger alarms. This allows me to wander thru the bowels of all types of buildings and businesses the one thing that really got to me is how much we waste energy!

Right now, the goal is getting rid of coal plants and figuring out how to get the money to replace these plants right? After all, take a 150 MW plant off line means you have to replace it with something that is going to put out a similar amount of power right?  The other option is make the plant cleaner which means expensive upgrades to reduce emissions, etc.  Well, ya! that is a good thing but I think we are failing in that we are not "meeting in the middle."  We can reduce the power we consume and from what I see, by a lot and for what seems to be fairly moderate costs.

The other day was spent wandering around a hospital checking logs and stuff and included being a room that was literally about 100º.  To prevent me from getting lost (which is pretty much guaranteed!) I was being escorted by a maintenance guy and we were talking about various things and I found out that the reason why the room was so hot was because it had passive ventilation that was simply vented to the outside air (more global warming!)  Now, I had gone from very cool conditioned rooms to much warmer patient rooms which means no matter what the weather was outside, there was almost always a need for A/C AND heating. I could not help but wonder why could they not filter the air in this oppressively hot room and pump it into the heating system to reduce the power needed to warm the air? Perhaps a heat exchanger to pre warm the water inlet to the hot water system?

I am also one of the main supervisors running the 7-Eleven Project and ya, this is back to the counting thing. After doing a few hundred (ok, maybe not that many, but it sure seems that way!) of them, I noticed the conditions of the stores varies greatly from one location to another.  The other day, I was counting ice cream and could not help but notice the back of the freezer had a frozen water fall of condensation that had permanently entombed several containers. A movie about a caveman brought back to life immediately sprang to mind but could not help but wonder why something as simple as replacing door seals to reduce moisture leakage was not done?  It would save a ton on the electric bill which was already very high but I figured the franchisee simply did not know any better.

I think what we should  be looking at is creating an energy efficiency office at some governmental level. I am not a fan of more regulation but there are some simple and cheap solutions out there that can really reduce our power consumption. They can also double as a liaison to companies providing energy efficiency solutions and as an inspection/policing agency as well.

Although this organization should have the power to levy fines, its #1 role should be education and assistance to the businesses to help them save on their power bill without a huge outlay of cash.  The Reagan Administration may have removed the Solar panels from the White House but the Department of Energy from the Carter Administration is still alive today and the States needs to create their own program as well.

Now, I mentioned a few examples of poorly managed energy usage of a few locations I have seen this past week but I am betting you know of some companies who are doing a great job.  Add them to the comments. These examples will seed the thought process for others looking to reduce their energy footprint as well.  Here in Lacey, one of the first Chargepoint stations installed was at Sunset Heating and Air.  It is supposed to be at least partially powered by the solar panels on the company's roof and it is still free to use today. Best of all, it sits across the street from one of Olympia's most famous local eateries, "Meconi's Subs"

Meconi is a house painter from Philly (i think...at least the accent fit) who complained that no one made a decent sandwich around here. Finally someone tired of his whining said, "So, what are you going to do about it?"   He said, "Well, hold on a second!"   Soon, he put up a small building (a shack) in the driveway of the family home on Lacey Blvd and posted a sign.  The place was 2 blocks from my house and just over a block from where I was working at the time. So, I tried it and he actually did make a pretty good sub!  Soon, he expanded, and expanded again, and again!  Now, will he become a household name? Well, he is up to 4 locations all in the Olympia Area and if it were up to us? Nah, we just assume keep him all to ourselves!

But even better, Meconi also has concerns about the environment. Now, unlike the old days when the Lacey location was his only restaurant, I don't see him everytime I go there any more so have not had a chance to talk with him lately  but can't help but think he might be driving an EV... 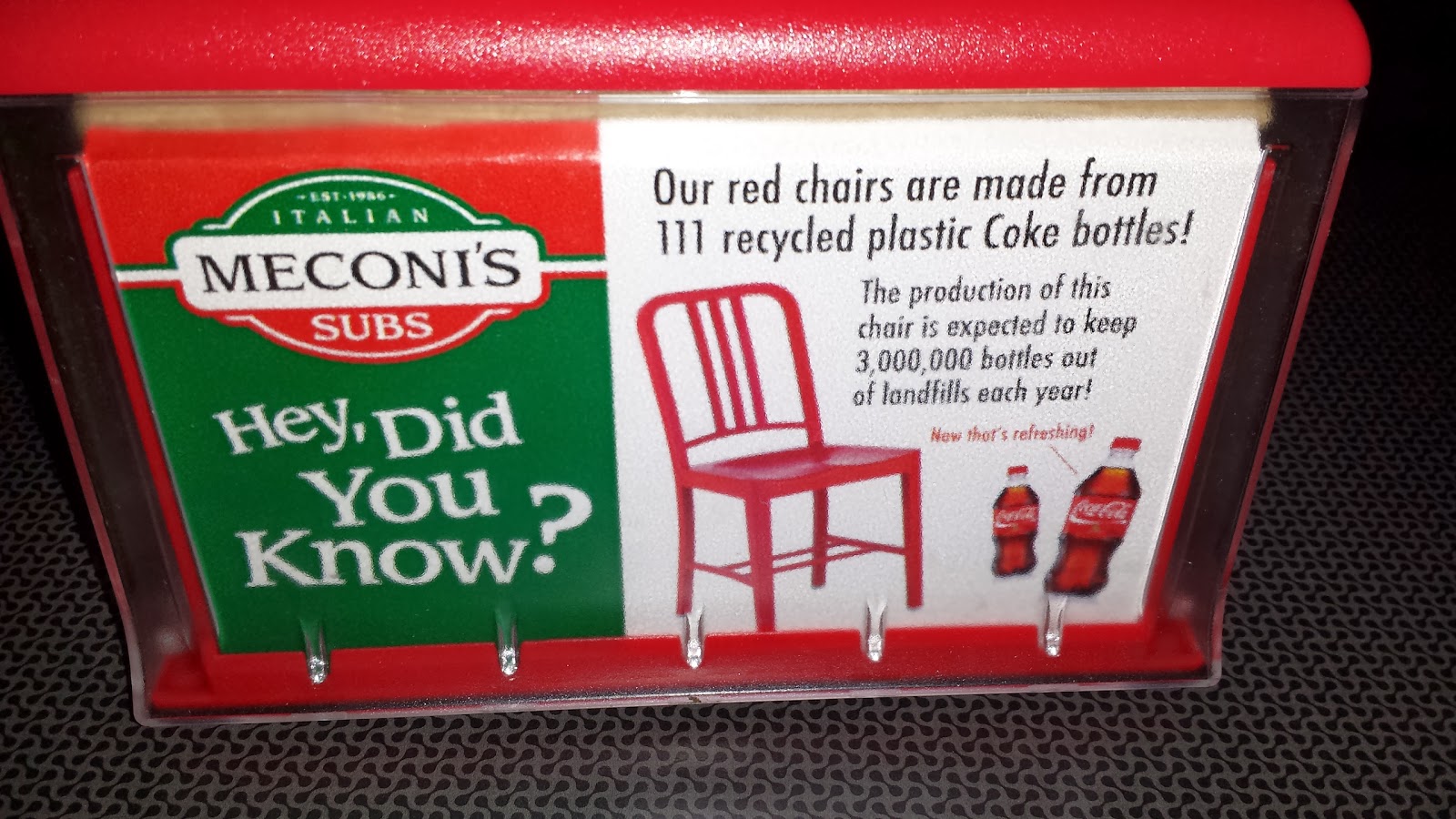