The Good, The Bad, and The Ugly aka "My Day Off"

Driving EVs for me started because of my concern for the environment and continues because they are fun and very cheap to drive.  But driving efficiently is not that much fun but it is still important to pick your battles. Yes, you will frequently find me rolling up to a red light at 10 mph in neutral or negotiating left turns at 30 mph because I don't want to waste energy on braking and all that but there is a limit to being frugal.  I can also guarantee that if I am first at the light, I will be two blocks down the street before anyone else gets more than 100 feet from the intersection. If you have an EV, you know why. 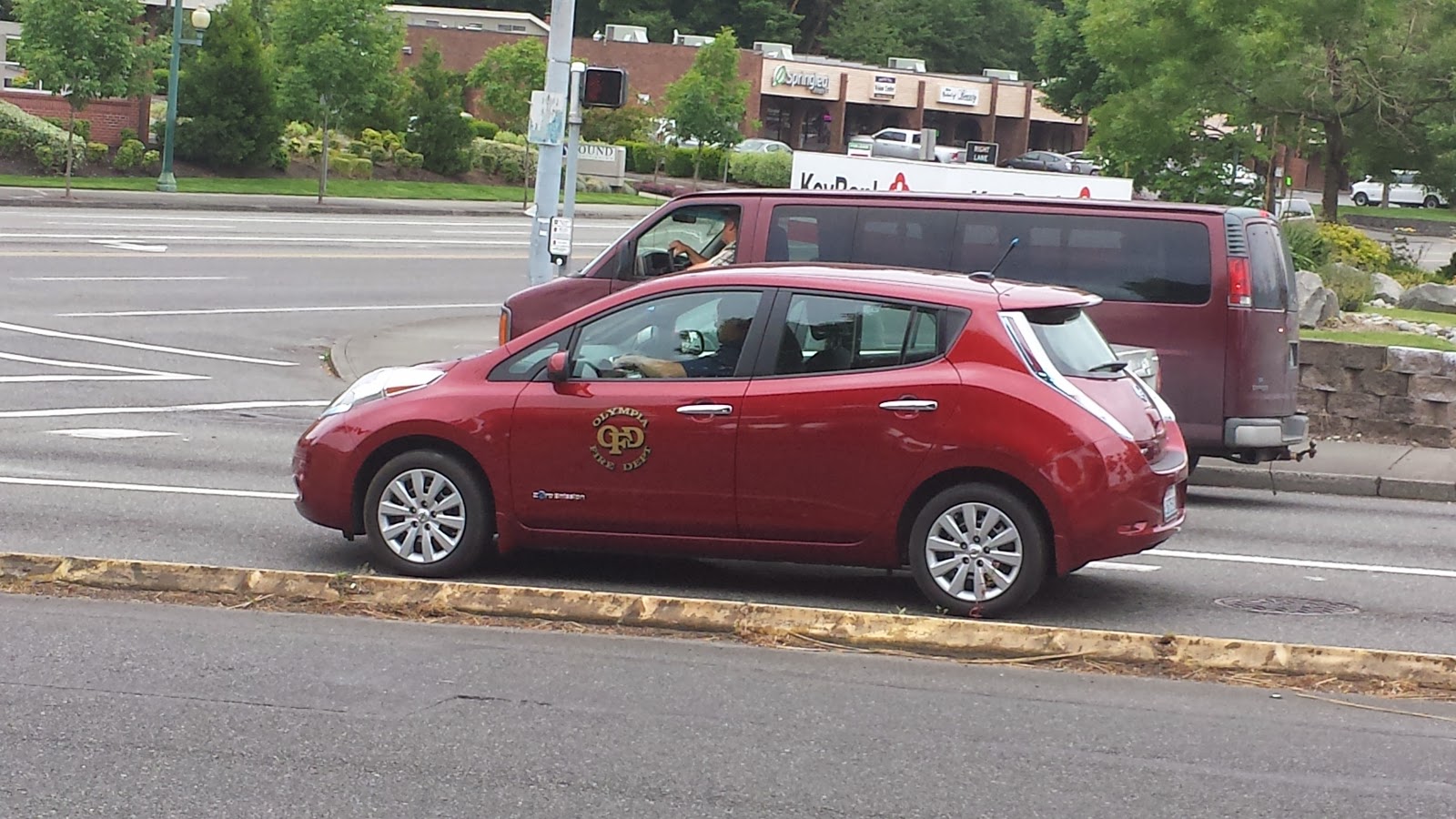 Yesterday when finishing my last job of the day,  I spied a LEAF from the Olympia Fire Department sitting at the light on Martin Way and Lily Road.  This is not the first foray into "cleaner" living for the eco minded city organization. They were also owners of the first Prius I had ever seen over 10 years ago. It was a 2001 Prius. They later got a few Iconic Priuses and a Ford Escape Hybrid to add to the fleet.

Speaking of Priuses, an MNL'er posted a chart comparing the sales ramp of the Prius against the LEAF. The LEAF is winning with the exception of 2010 which really shouldn't count but then again, its just a chart right?  But we are talking about the original Prius which looks more like a Corolla than anything else and lets face it, it was a relatively weak introduction for the poster child of hybrids but then again, who is to say that LEAF 2 won't match the same level of improvement as the Prius did in 2004? Well, count me as hoping the LEAF 2 does it!

July 1st, Thurston County institutes their plastic bag ban to the chagrin of the Island nation of "Baggyland" out in the Pacific. Although we expect the move to have little impact on the growth of the plastic nation, the move has gained a lot of steam among several communities in the West.  To help with the change, they are allowing retailers to charge for paper bags.  Now, that is kind of a bummer because Winco already has paper bags as an option (one I ALWAYS take) and they were free. Oh well, I guess maybe I should use my cloth bags since they do ride around with me in the car...unused.

At 55, age is beginning to get the best of me along with my waning interest in stationary exercise options.  My new house is not bike friendly. To get anywhere, I have to negotiate a hill which is really not that steep or long but then the street my neighborhood feeds is Bike Hell. It has no shoulders and although I pass by bikers crazy enough to ride on the street, I am simply not feeling that lucky. Either way, I decided to start jogging instead. Well, it took a week of going up to a mile and half or so (2/3rds of it walking) to now going over 2 miles regularly (now up to half running, albeit slowly but still running)  Anyway, I was beebopping down the Chehalis Western Trail and came up on this 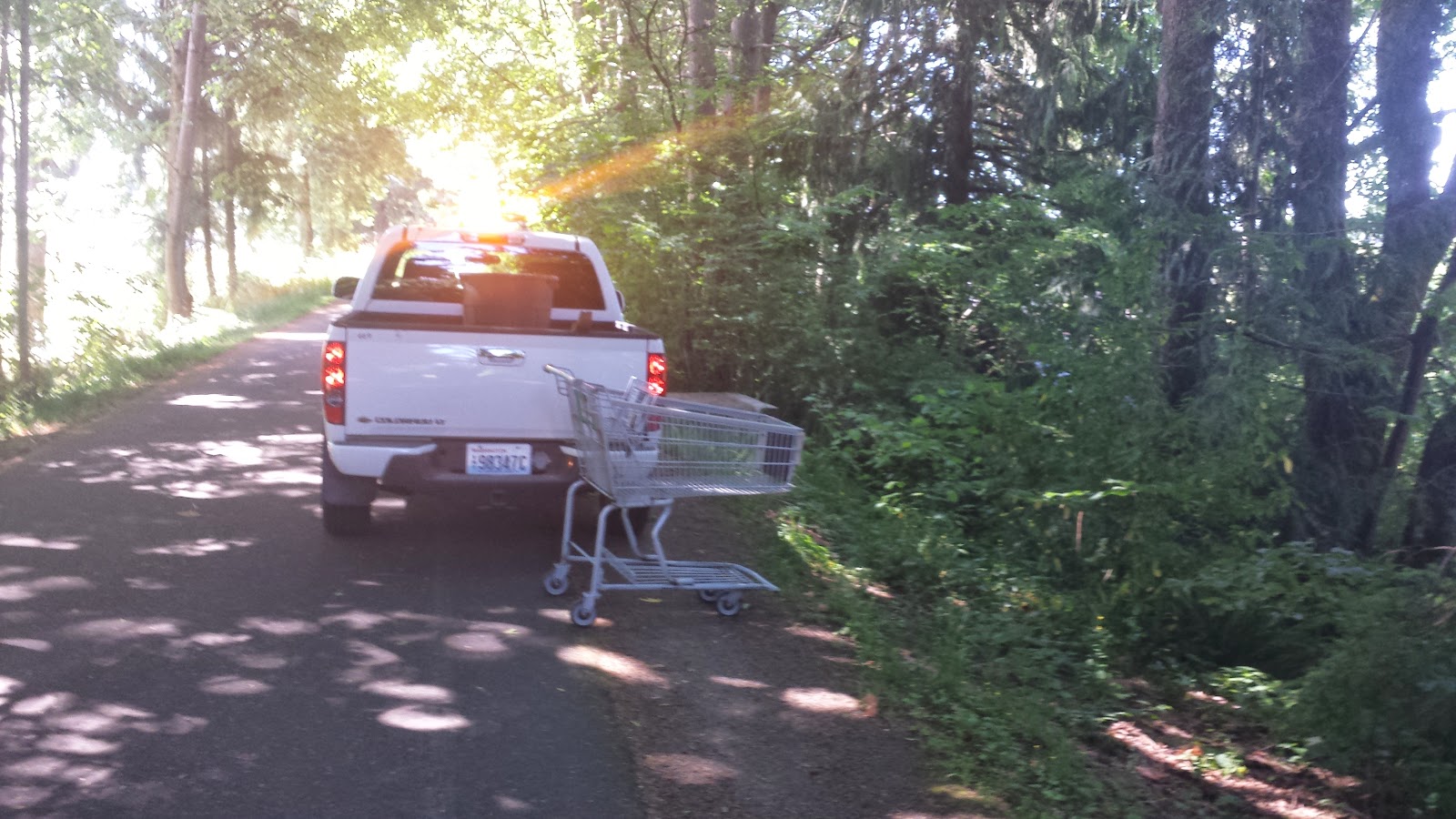 It was a maintenance truck. Now the trail is the old railroad tracks that used to run thru town so its relatively straight and flat so I saw this truck with its flashing lights a good 3 minutes before getting there and it took about the same for it to fade away out of sight. As I passed, I saw a guy off the trail doing general trail maintenance and picking up garbage (guessing that is where the shopping cart came from) and the whole time, the truck WAS IDLING AWAY!!.  Now, I pick this trail because its quiet, out of the way but also easy to access at several points thru out town and its away from traffic so I do not have to huff and puff exhaust.  This kinda ruined it for me along with the fact my sales tax was paying for the gas that was idling away into thin (but getting thicker by the second) air.

Finally when heading to work (on my day off) to drop off timecards and pick up next week's work assignments, I came across this on I-5 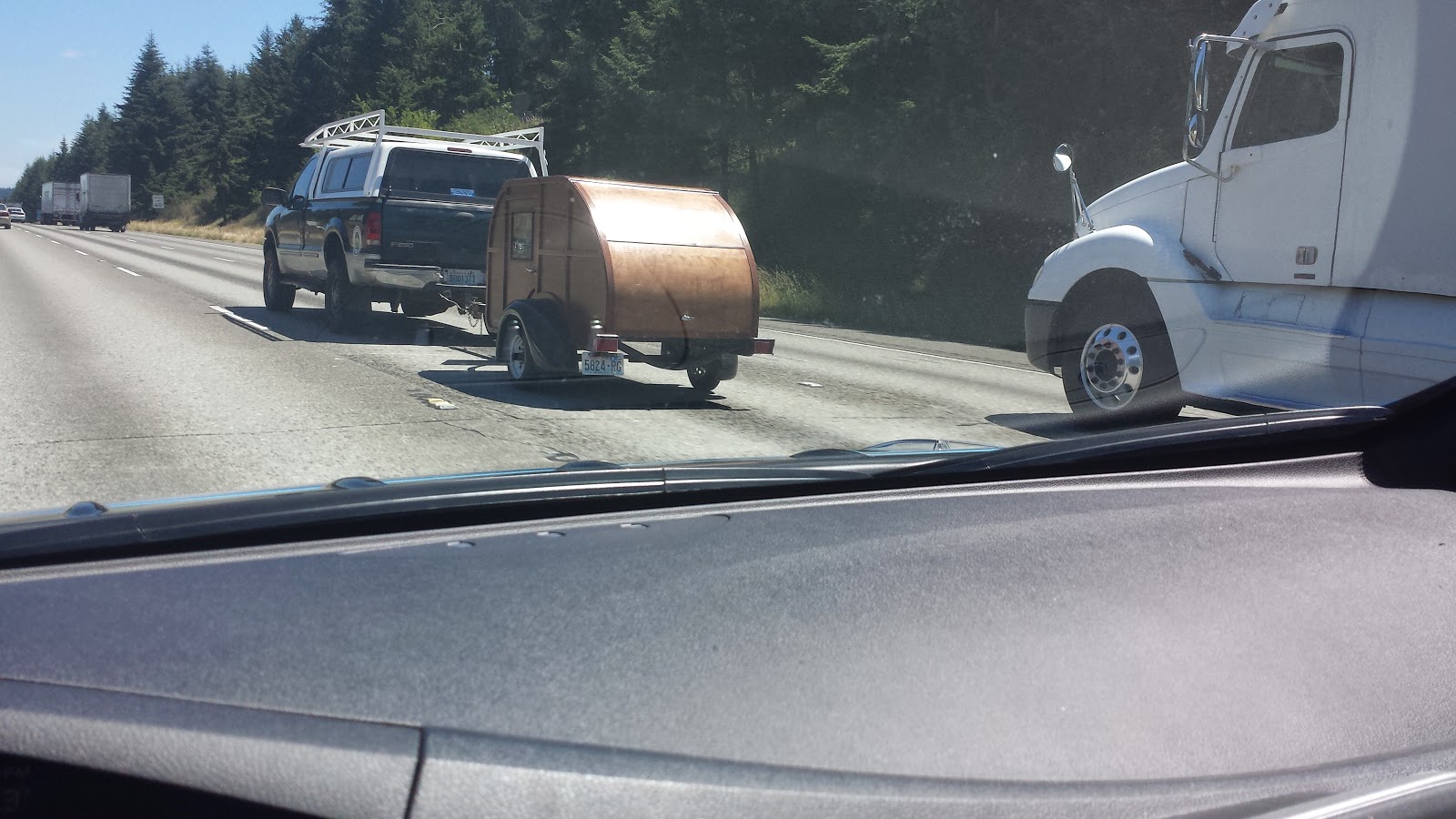 This cute little trailer was being hauled by a truck with an EPA markings on it "for official EPA use" it said. Could not help but wonder what kind of range I could get on my LEAF while pulling it. It was no more than about 6 feet long so it couldn't have been that heavy. It was like a backyard toy camper you get for the kids to park next to the plastic play house.  Anyway, it was cute so...

Finally, my sister who has a good heart sent me this. 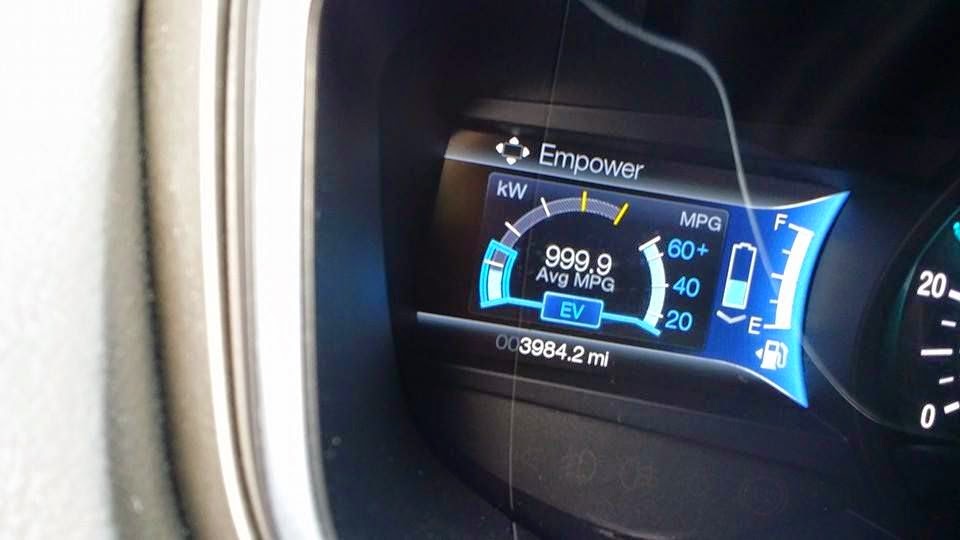 Its the dash of her 2014 Ford Fusion Hybrid. She was so proud so I just didn't have the heart to tell her that there are not enough digits in the World to correctly "display" the MPG of my LEAF. Either way, if she is happy, I am happy.

Posted by DaveinOlyWA at 7:12 PM