I have proof that a gasser can be cheaper than an EV because my Corolla only used $24.20 in gas last month while my LEAF cost me $24.43!!! Moral of the story; Spin goes both ways...

The LEAF using twenty three more of my hard earned cents traveled 1489.3 miles with its costs escalating due to $2.02 in public charging fees along with PUD charges totaling $24.43 or 1.6 cents per mile. Thankfully, I was saved by the 90 day free fast charging Nissan gave us for putting up with the borderline battery chemistry in the 2011 LEAF and got over 100 kwh on that program.

Since I am nearing the halfway point of my free 90 day charging, I am still working on getting the $50 worth that I declined in exchange for the fast charge sessions. But at least 2 of the chargers I might use are out of order including AV's Tumwater location and this definitely qualifies as the longest downtime stretch for that location by far. The location has been out of order several times but frequently was back up and running within a few days. Its been over 2 weeks now... :(

Now this is not being debated nearly as much as a year ago simply because there are too many people out there proving it on a daily basis but just some more evidence that the 2013 pack is a definite improvement of the 2011-12s.  We have known for quite some time that battery stats reported by the LEAF  and logged with devices such as LEAF Spy can have some pretty wide swings based on recent driving and charging habits.  Put simply; Drive your LEAF a lot and charge it fully every day and your battery stats will probably reflect a status better than reality.  Drive it modestly,  partially charge it or go several days between full charges, etc. and you see just the opposite. Numbers lower than the true state of health in your battery pack.

Well this is what I just did and yes I purposely did not charge it for high numbers which meant a lot of shorter duration charges that did not complete AKA Nissan 80% long life charging mode. ;)  As expected my numbers took a dive from the 61-62ish range to 58.44 ahr, 88.62% Hx, and 19.6 kwh available on April 25th. On that day, I drove 58.7 miles which is really far enough to keep your battery fully balanced with daily full charges.

But from the 26th to yesterday, I had a large client (they do this on last week of the month for most of the year Tues-Sat) and decided I would LEAF it every day. This required fully charging at home every night, A fast charge in the morning at work before picking up my crew and a fast charge in the afternoon after dropping off the crew.  Now the morning charge was only needed 3 of the 5 days since Renton and Tukwila are close enough but on the other 3 days for the Seattle Stores, I averaged collecting 4½ kwh which doesn't seem like much but my degradation needed it.  In the 5 days, I traveled 626.2 miles, publicly charged for 93 kwh and ended up yesterday afternoon with this 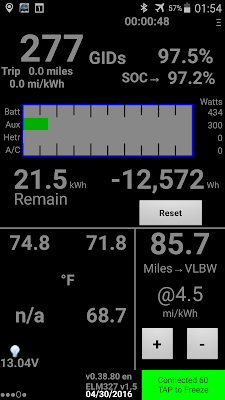 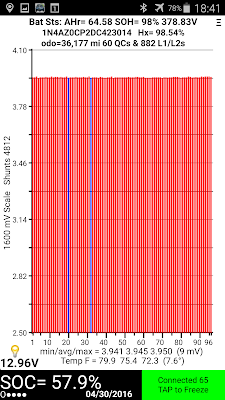 
Fast Charge Notes;  Twice I saw a better than 100% efficiency based on kwh remaining delta / Wh
Using the pix above it would be 21.5 - whatever the charge session started at/ 12.572 (which i always reset to zero for the charge session)  Now this did not happen during the past 5 days but earlier in the month and I have not been able to reproduce this phenomena so am writing it off as user error or LEAF Spy strangeness...or something.  Other than those two times; Fast charge efficiency seems to be running between 91.4 and 94.7% efficient and no brand of charger seems to be consistently outperforming any other but as always, I will track it to see if any vendor emerges or falls from the pack.
Posted by DaveinOlyWA at 12:37 PM