A Tale Of Two Pictures 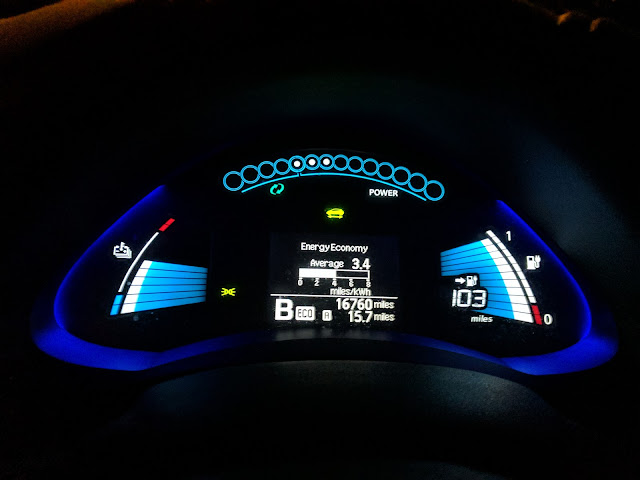 I was at 3.2 miles per kwh when deciding to take pix

Are you excited? I am!  We are a week from the details of Tesla's Model 3, 6 weeks from LEAF II, and this week, VW broke ground on the charging network they are building to compensate for polluting our World while touting "clean diesel."  These are exciting times!

But what does that have to do with the picture above?  Well, lemme tell ya.  Generally at 3:45 in the morning there is not a lot going on...as long as we aren't going anywhere on I-5 that is. Thursday, I was doing my morning ritual getting ready to drive north when I found out there was an accident on the way, a bad one.  I cut my routine short, leaving 15 minutes earlier than planned and took off averaging 70-75 mph for the first 15 miles before hitting traffic that slowed me into my normal 65ish (we still don't comply with the drive right except to pass law around here)   By doing this, I arrived 3 minutes early as opposed to my planned 10 minute earlier arrival (with a 15 min later starting time!)

Before we get more into this, a bit of history.  Most of my driving home is southbound from Pierce, King or Kitsap County.  I exit I-5 from Marvin Road, hit a few roundabouts, pass by Cabela's  and hit this downslope to my neighborhood. I always coast hitting around 50ish before hitting a short rise to another downslope on the other side.  I mention this because I have seen gains on the GOM as much as 10 miles.  This allowed me to see crazy numbers the next morning when I left for work.  I knew the estimates were high and why. IOW, the term "GOM" a coined acronym for "guess-o-meter" was a very apt description. It literally made estimates based on very recent driving conditions which doesn't work for most especially when we tend to drive the same routes daily.

But Nissan does listen to us and although they don't have a trumpeting spokesman like Tesla does (Since Jobs is gone, does anyone any more?) they have still worked on getting us what we want.  But they do have to deal with entrenched corporate ideologies, outdated processes and a multi-layered approval process that has greater veto power as it moves up the ladder.

But one thing I have noticed is that during my day, my driving conditions varying wildly.  Before, I used to hypermile first thing in the morning due to the fact that I was frequently going 10 to 15 miles farther than the EPA said was possible in my 24 kwh LEAF.   Most of the time, I just couldn't justify stopping to get 2-3 kwh (which I had to do A LOT!)  Despite being authorized breaks (which cannot be waived) or meals (which could be sometimes) I didn't want to spend 15 minutes at a charger.  My driving style remained fairly static thru out the day with slowdowns for congestion a daily routine.  My GOM varied wildly during the day which caused me a sense of comical relief.  It was literally fun to tease the display into making itself a complete fool!

But then my S30 came along. I only did it because I realized that Chevy was not going to provide me an acceptable lease option so I decided the first week of November that extending my 2013 lease 6 months to get a Bolt was off the table. Sadly I was right. (To this point, they still have not)

Now, I have to admit, I was "somewhat" in the camp that a 6 kwh bump wasn't significant. But it did open up several options for me especially in Winter.  I had long since resigned myself to the fact that stopping to charge was a necessity and it was then that I realized that I was getting too old to sit in a car for 90 minutes at a time anyway.  My typical drive home (using yesterday as an example) was 52 miles taking 102 minutes. Too much sitting... It takes my legs about 10 minutes before I can walk again and part of that is due to my job where I typically walk 12-14,000 steps in less than 8 hours. (Fitbit will back me up!)

As expected, the 6 kwh bump wasn't that much of a big deal but the much steeper fast charging profile was a very unexpected surprise!  This allowed me to do much longer trips quite easily and my time at the station became much more effective. No longer was I getting 10 minutes of fast charge, 10 minutes of medium charge and 10 minutes of "barely over L2" charge. It was a full 30 minutes!  Clearly evidence that Nissan had heard us.  I can't even begin to describe how much more use I could have gotten out of my 24 kwh LEAF had it charged the same way!

Anyway, back to the picture above.  That was Thursday driving 75 mph.  So add the elapsed miles plus the GOM and you get 118.7 miles which is right in the average 118-125 miles I tend to see with a huge range of mixed driving that always includes a lot of stop and go.  I had noticed the GOM was a lot more accurate in my 2016, but this was quite literally shocking.  With the old GOM, a 3.4 mile per kwh average would likely had seen me with 95.5 mile range or less.  I snapped the pix a split second after it changed from 3.2 miles per kwh which would have been  89.9 miles.

So now its Thurday, my sleep in day.  Leaving home at 5:15 AM, headed to Tacoma, I am tooling along at my 65ish speed basically following traffic primarily in the right or center lane with occasional bursts to 70 to pass people who can't determine what speed they want to drive, etc. and snapped this and realized later (this morning in fact) that both pictures had the very same GOM reading! Well, now you know the inspiration for this blog! 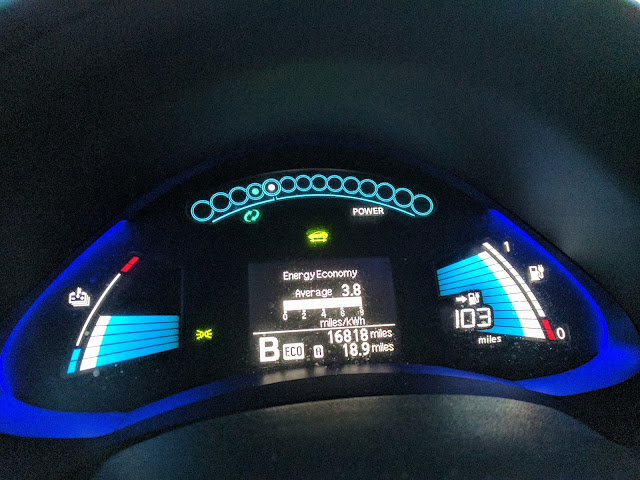 Now a few things to point out.  Total estimated range will be 121.9 miles which is nearly the same as Thursday's trip despite being 10 mph slower over nearly the same distance.  Since both days, I started with 28.1 kwh available and 363 GIDs (for those of you that recall I reported the start of degradation. Sorry but it went away...)   But the reality is with a .4 mile per kwh difference, the range should vary about 11.2 miles, right?  Also, 28.1 kwh @ 3.8 miles per kwh only gets you 107 miles. So how is the GOM getting 121 miles?

Well, as mentioned, I see all kinds of traffic conditions during my day.  Because of my starting times, I don't see a lot of congestion. (Shoreline trip after getting past the Fife accident averaged 70 mph +. Try doing that at 7 AM!)  When getting home, my miles per kwh readings are averaging 4.3 or 4.4 (those two numbers come up 80% of the times for all days over 100 miles)  which means a normal range is 120.8 to 123.6!  This makes pretty clear evidence that Nissan is hearing us and one of our loudest complaints has been how deceiving the GOM is.

This brings me to a recent reveal for the 2018 LEAF of one pedal driving.  One thing we have talked about is how much B mode was appreciated and wished it would go farther and looks like Nissan is listening again. So now, for those who are in tune with LEAFers in the wild (or are a member of several dozen LEAF groups on Facebook like me) What is your prediction for new features on the 2018 LEAF based on what we have been complaining about the most?

I will leave the obvious unsaid...
Posted by DaveinOlyWA at 8:02 AM