As expected, June was just as busy as May for driving.  I did use the Corolla more mostly to keep her from sitting too much and also because I had passengers on some jobs that I would have had to stop to charge on the road making it a less convenient use of their time.

I am paid for most of my commuting because its a different location every day when driving my personal vehicle but passengers are on a different pay scale which is not good so additional time on the road is not beneficial for them in most cases.  When driving alone, I can alter my travel logs to take out time for charging when I have no justification for it.  So if I stop for 30 mins to charge and qualify for a break, I will deduct that break time and roll my real time to home back the appropriate amount.

I also frequently upload assignments, download new ones, etc.  This is also considered. For example, I drive home arriving at 5 PM but on the way, I stopped  for 30 mins of charging plus "detour" time of say 10 mins. (This is time off route to get to station itself.)  So my adjusted return time goes from 5 PM to 4:20 PM.   Now if I did upload assignments, I would not take that from drive time simply because uploading pays a lot more ;) so although I am honest with the books, I also do it to maximize my profitability.

The LEAF traveled 2485.6 miles costing $14.78 or .59 cents per mile... for now.  I did charge at my LEAFs hometown of Campbell Nelson Everett and the Chargepoint did advise it was $3 but it has yet to appear on my billing statement anywhere.  So I am reserving the right to call this month .2 cents per mile.

One thing mentioned is how much others could expect to pay if they only charged at home at my rates (just under 10 cents per kwh) and without the 405 NCTC Kwh last month or any month, my lifetime cost runs to 2.21 cents per mile. Still nearly 300% better than the Corolla.

Degradation;  With nearly 16,000 miles on the clock, batt stats are still frozen in place.  As mentioned several times before, in my area, I think time is the prime degradation factor and have not changed my mind on this.

This is an improvement over my 2013 which started dipping below the max 284 GIDs randomly before the end of its 8th month.  I have 12 reading in July 2014 ranging from 279 and up.  Keeping in mind, I still had several 284's after this but the definite beginning of the downhill slide.

Now keep in mind; we are talking two completely different cars with a 3+ year gap in technology so some improvement should be expected. But there are differences. The 2013 was charged mostly at home seeing only 31 fast charges in its first 8 months while the 2016 has 137 with a week to go.

The 2013 was fully charged nearly every night while the 2016 has been maybe 50% of the time.  Remember, I went 3 weeks without charging at home at all. I also had the water pump issue and only charged at home once during that period as well. This all means that the 2013 probably had a better balanced pack and the 2016 stats could be held up by the very heavy usage and the large number of QCs.  This holiday weekend should tell me something....maybe.  To compensate for the 15 consecutive days worked (ending yesterday) I am off till Wednesday and with my self imposed driving ban on holidays, should put minimal miles on the LEAF. Add to that, driving the Corolla yesterday and a local job Wednesday puts my LEAF on light duty for over 5 days.  Not sure if that will be enough to see a change in stats so stay tuned!

Maintenance; Well since I am over 15,000 miles that naturally means that tire rotation #2 is in the books. A lot of people rotate every 7500 miles and I suppose that might work. Keep in mind, I did experiment with a 10,000 mile interval that failed. Simply too much wear on the fronts causing those two tires to fail the lease turn in inspection. So do 7500 if you want but I will stick with the 5,000!

Finally some pix!  (Mostly tossed in because an all text entry seems boring) 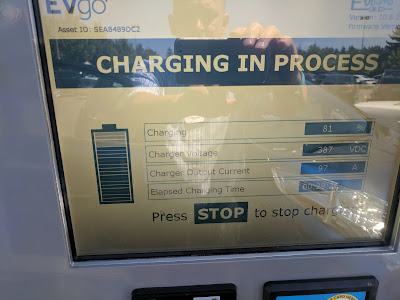 Can't tell you how cool it is to get a full 30 minutes of fast charging!
As you can see, I am a few seconds away from ending my EVGO
session and still at full speed. (amps were bouncing around and
tried to catch it at 99 but oh well!) 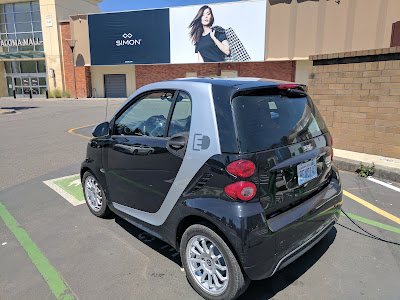 First encounter with a Smart EV.  Very small but seems like
huge front passenger space. Great litle commuter but too
small for my needs.  Plus not sure I would want to be
crossing the Narrows regularly. But I guess batteries would
act as a good ballast to keep it grounded 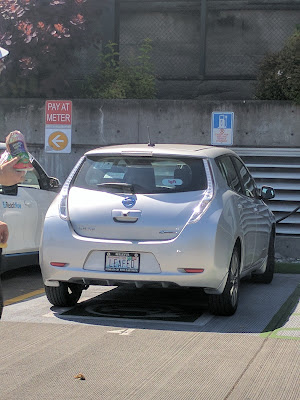 This is just a shout out to fellow LEAFer Glenn Von Wedmeier at
Harvard Market.  Had planned to plug in since I was there several
hours before the crowds but an expected detour did not happen and had
65 plus miles of range so I "gave up" my spot to Reach Now. :)
Plus didn't want to charge to 90%+ and let it bake in the Sun
all day. 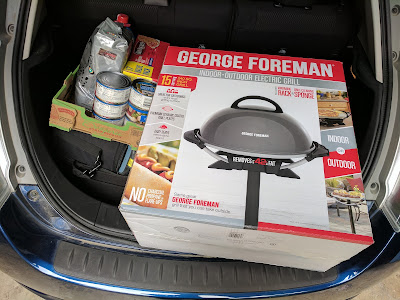 And finally; Another gasser bites the dust! Have needed to
upgrade my BBQ options for a while now. The old one was
too small really.  Saw this on sale at Costco and simply could
not resist! This leaves the Corolla as the last "smoking holdout"
and yes, she is sweating bullets right now!
Posted by DaveinOlyWA at 8:24 AM