The Clock is Ticking

Larger packs are already here but faster charging is not.  Several stories coming out with Bolters almost bragging they had to restart their fast charge sessions multi times to "fill up" while other LEAFers stating waiting over an hour for someone to complete a charge.

Does this seem fair?   My LEAF is almost never filled up after 30 mins, but I never start a 2nd session and yeah, there have been times I left knowing I would have to stop again somewhere else on the road.  But that was pretty much the "LEAF charging mantra"  Charge the lower part of the pack for greater efficiency, less heat, yada yada, right?

The other thing is that time in one spot is acceptable if its short enough. I had conditioned myself to have stops that last basically 15, 20 or 30 mins and this corresponds to the length of time I charge. How convenient is that!

Now, I am not a fan of restricting someone's charging time if they need it and we do realize that the CCS network is severely lacking in several areas including going south from Tacoma Mall, which brings me to an incident witnessed yesterday.

Bolt charging while passengers were inside apparently napping.  The charge session ended as we were walking into the mall. I did not stick around to see what was going on.  I returned about 15 mins later and their charge session had been restarted.  So its really anyone's guess as to how long they had been there.  But there was obviously others who were waiting as both L2's were full and another LEAF parked near by. I was going to charge the full 30 mins (since I was on "electrons" pulling in) but I had enough to eek it home so unplugged and left.

Maybe its time to institute a 30 min charge time limit.  Finish your first 30 mins and get back into the queue if you have to.  Public charging stations should not be monopolized by cars who have the desire to charge for 90+ mins.

Now the easiest way to do this is allow queuing on the stations like Blink does (or did...) This way, the Bolter can't run two sessions together if another Chademo car has queued up already.

Either way, chime in.

1) Should we institute a time limit on the fast chargers?

2) First come, first served even if it takes all day?

Keep in mind; the Public World has time limits imposed all kinds of things and comes with a huge level of "resigned acceptance"  We don't like it, but "them's the rules" so we grudgingly abide.

If we want more, we simply get back in line at the end and wait out another turn.  With the current state of public charging, this is something we need to adopt ASAP. There is simply way too much privileged abuse going on out there right now. 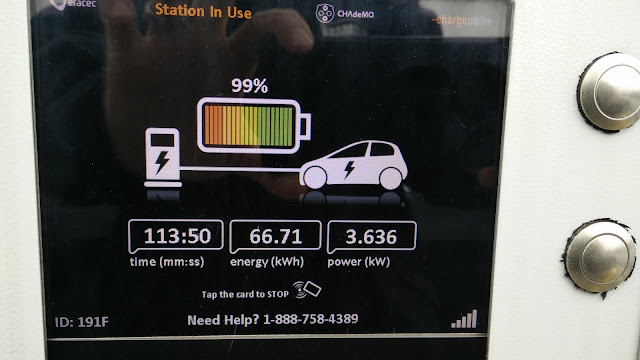 Posted by DaveinOlyWA at 7:28 AM