Death By A Thousand Cuts

Recently, Washington State decided to suspend sales of Lotto and Powerball tickets in preparation of a possible government shutdown if a new budget could not be agreed on.  Everyone in the state thought it was BS and that we always go thru this doom and gloom scenario every two years on the local news only without a shred of reality. Well, New Jerseyrites have a different view on that...

Anyway, it must the season because now I seem to be seeing the same thing over and over....

"My LEAF was at 93% SOH in April but now its down to 86% only a few months later. If this keeps up, I will need an EVSE at BOTH ends of my driveway to go anywhere!"

OMG!...Seriously???   There is NOTHING you can do to degrade your pack that fast!  But the readings did happen so what did happen?

Well, its really anyone's guess but there are a few possibilities starting from the worst (and probably least likely)

BMS Reset;  I blogged about a famous (mostly famous since this was one of the first actually verified)  BMS reset 2½ years ago detailing how someone bought a used LEAF with 12 capacity bars only to find out it was sold 6 months earlier with only 9 capacity bars.  But as luck would have it, the car was a well known one whose degradation was tracked on www.mynissanleaf.com so she got a new pack and it all worked out.

Pack Stats Manipulation (PSM); For whatever reason, the pack numbers can be puffed up to a level not likely indicative of the pack's true condition. I have demonstrated this several times on both my 2011 and 2013.  (Haven't lost anything yet on 2016 so that is yet to be tried.)

So lets move a year forward to March, 2016.  Now I am at 34,000 miles and ahr averaging 59ish so too late to boost the numbers?  Although it the blog was not specifically about boosting the numbers, the pix are still there to see...

Couch Potato Syndrome;  For lack of a better term, your LEAF is a lot like you. It performs sluggishly in the cold, degrades quickly in the heat and more to the point; gets fat and lazy if not exercised properly!  This is closely related to the  PSM mentioned above.

The real question is can the LEAF be permanently damaged from lack of use? And the answer to that is yes. The reason is that degradation also suffers from the march of time.  There is a ton of anecdotal evidence that 2 LEAFs living side by side will vary only slightly in their levels of degradation even if one has driven 2 or even 3 times farther.  I we Pacific Northwesternites are lucky in that regard.

But then again, it is a two edged sword.  Unlike Arizona that has 40 year old cars, so looking nearly new, all our 40 year old cars that spend a lot of time sitting are rarely any other color but green nowadays...

But this does add another dimension to the purchase decision.  Previously the common ideology was "as long as I don't charge too full or run it down too low, I can do my 40 mile commute for several decades"  and that is proving to not be quite as true.... Well, sort of. You can actually go a long time in a LEAF if your needs are really that modest but we are seeing more and more doing 100,000 miles in 4 years with healthier packs.

But the reality is that no matter how your pack numbers changed, the pack does not fall off a cliff. It is well known that new packs tend to stay at max numbers longer than is realistically possible which tends to support the claim that Nissan instrumentation is not the best. (Please do not blame LEAF Spy! It only reads what is transpiring on the LEAFs data bus. Very little else is going on here. IOW, DON'T BLAME THE MESSENGER!)

Your pack dies little by little which means everything matters.  Now before you go into panic mode and start calling around for bids to AC the garage, lets take a look at the compromises first.

Although everything matters, you have to keep in mind, several hundred cuts may not be good but also may not be all that inconvenient either.  The extended degradation warranty on 30 kwh packs actually benefits us Pacific Northwesternites since its actually long enough for the more extreme cases we see here.  The previous 60,000 mile 5 year thing was simply hard to attain in this climate.

We also have to think (finally!) that public charging is going to be better making opportunity charging much more convenient in the near future.

So what can we do that might make a difference? Weeeellll, SINCE YOU ASKED!!

***WARNING!! DAVE DRIVING TIPS AHEAD. APPROACH AT YOUR OWN RISK***

I am on my 3rd LEAF and as luck would have it, from all early initial impressions this one also seems that it will outperform many of yours. How lucky can I be!!

Or is it really luck?  Or maybe the question should be "What am I doing that makes my pack stand up so well?"

Could it be slow driving?  Well that argument would have had a lot of legs on my 2011 (I was simply too paranoid to go faster) but not as much on the 2013 (With LEAF Spy, I had the confidence to drive at a speed to get me home at ~ 10 GIDs and that frequently meant 70!) but on the 2016?  Well... it only took 3½ months to get a speeding ticket.  (confession is good for the soul!) so that should tell you enough...

Could it be the Mediterranean climate of Olympia?  Well, that could be true but for the fact that the car spends most of its time sitting in parking lots in full Sun all over Western  WA, the same place most of you all live.  Climate helps, parking in garage that is shaded more than half the day helps, etc. Remember, everything matters.  Charging primarily only late at night helps. Leaving garage door open a few hours after the Sun goes down helps. I live on the edge of somewhere facing the middle of nowhere.  You have to know the area to understand this statement but theft is not a likely risk. Besides they would probably grab my bike and other stuff that sits outside unsecured all the time, first.

Well, in my mind, its none of that.  I get more because I simply travel a lot of miles without the battery at all.

Only God knows why the resistance to neutral driving persists today.  On the Chevy Bolt forum we still have people who are dead set against it because its supposedly unsafe but none can actually say why its unsafe and these are the same people who say they are forced to drive 10 mph over the speed limit!

Years ago when belt driven power steering was the norm, there was an issue with driving in neutral. Back when mechanical shifting was literally unrestricted, neutral driving was not a good idea. Several mentioned shifting accidentally into reverse while coasting down a hill.  Not good for the car. I did this once just to see what happened.  It only cost me two new wheels because the rear locked up long enough and hard enough to slot the lug holes on both back tires! I was lucky in that I didn't even know it happened until I got home and decided to examine the car.... Maybe I do have some luck in me!

But why do I do it?  Well, that is simple. It is "free miles."  In neutral, the battery does nearly nothing. Neutral allows you to maintain speed better as you approach traffic, a light or a likely stop.  Anticipation is key to eeking miles out of your EV and I found neutral is a lot more forgiving then light regen to the stopping point. My ultimate win?  Shifting to neutral several blocks before the stopping point only to have the light or congestion clear up just as I am rolling up to them having lost 10-15 mph. So I am starting back at 25-30 mph instead of zero.  Any law of physics will tell you that regen cannot win that game, NO MATTER WHAT.

But the reality is I only have the ultimate win infrequently.  Maybe 10 times a day out of 100+ opportunities.  The most likely scenario is too much traffic requiring a slightly higher speed to the stopping point or simply too many cars sitting at the light, downslopes, etc.  IOW, not stopping is not an option.

Another common scenario is the "half win." This means coasting with regen.  I do this on very steep hills where I will regen to something say 5-10 mph below the speed limit and then coast to say 5-10 over (obviously this is dependent on conditions. Don't think I am rolling down residential hills recklessly since this is not the case) and repeat as necessary.  The other time is when things happen that simply does not allow you enough time to adjust your driving to maintain maximum efficiency AKA typical Puget Sound traffic conditions.  I have been doing neutral driving so much (started with first electronic shifter in the Prius in 2004) that my normal reaction when lights change in front of me is shifting to neutral. Frequently I am going to fast to stay in neutral but I have time to gauge when regen is needed. I always drive in B mode and yea, my brake pedal is a very lonely place.

So is neutral driving really making that much of a difference for me? Well hard to say and since an experiment would pretty much require side by side cars over several months and tens of thousands of miles, I will never find out because I am not abandoning this technique. Well maybe I will when my 500 mile LEAF shows up.  But again, I am doing this easily over 100 times a day and the shifter is showing no signs of wear and tear! (or maybe we should be looking at the pack? ;) )

So can we look at Neutral Driving as a thousand tiny bandaids?

Finally; anyone with LEAF Spy probably already knows this but regen, even slight levels don't hit the pack evenly. This I have repeated pretty much every time.  Have a million pix of this including ones that split the cells exactly in half but decided on making new ones to show my less than 100% Hx to prove I am Human... 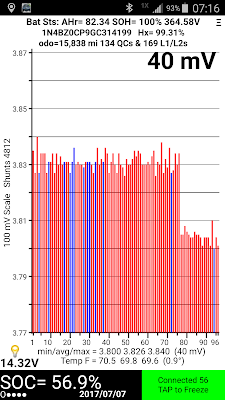 As you can see, not the best way to maintain the balance, right?  I would have felt better if the pack switched sides every once in a while but have yet to capture that....

So why does this not happen during a call for power? Again, several attempts using 2-3 Powerballs (must be leftover budget worries that caused me to say that.)  and pretty much an even draw. 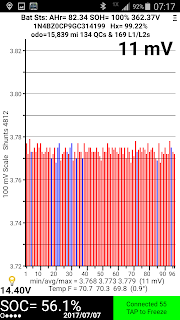 Ok, I will admit to using the best of 5 pix to display here.  But they were like this one. Random levels on adjoining cells. No group of cells up or down. Delta ranges from 11 to 26 mV.

So it would appear that LEAF Spy is at least partially on my side.

So, do try this at home unless you can come up with a valid reason that neutral driving is dangerous.