What Constitutes Abuse Of NCTC?

If you have read more than a few entries of my blog, you already know that free is in my preferred price range! And why shouldn't it be? The reality is that nothing is truly free. We have paid for it in one way or another.  Just as Tesla owners have paid for the free access to the Super Charger network, I have also paid for my access to NCTC.

Now, I have had a few comments on my charging sessions count which is currently 145 QCs,  182 L2's (there was actually one L1 in there for an hour only done to demonstrate) which lead many to believe that I was mostly charging publicly instead of at home and...well, yeah that would be correct!

So is it abuse to get way more charge than I need to get home?  Well, no not if I am not blocking anyone else from charging which actually did happen a few times but only because I was eating and not around the car but I paid for the right, right?

But I feel the need to defend half my actions so despite having 16,390ish miles on my LEAF, I have only had it 4 days over 8 months which is about 245ish days, give or take.  Now, I generally don't charge at home every day like today, I won't because I don't plan to go anywhere other than lunch or the gym or something. I have 85 miles or range more or less so don't need to charge.  Also need to consider times I have gassed it which would be more days where no charge was needed, etc.

But the reality is that the 30 kwh pack has made it easy to do a LOT of driving which means that public charging is more likely because of it. If you think that sounds counterintuitive, it really isn't. The reality is more range encourages much longer trips.  Unlike my 2013 when most of my "long" trips might have had 1-2 fast charges with an occasion 3 in there, I have done one 5 charge trip, 4 4 charge trips and the 3 charge trips I have lost track of... The month of May is a good example. I drove nearly 3300 miles but had 9 days where I drove less than 25 miles. So that leaves 22 days "averaging" nearly 150 miles a day.  But the best part of all that was most of the charging stops were incorporated into my work or "play" day so very little time just sitting there doing nothing!


Generally I plug in for the full 30 mins whether I need it or not as long as there is not too much action going on. I tend to use Tacoma Mall most of the time because there are two stations which makes my blocking someone much less likely plus its 8 blocks from my office which I am compelled to visit waaaay more often than I want to... But because the office is 22.6 miles from my house,  this puts me in a situation where I am frequently getting home with 70-90 miles of range.

But my cheapness doesn't end here. How many of you use a credit card at chain restaurants? Like Red Robin, Applebees, etc?   And if you do, I only have to ask, why? Do you like spending more money than is needed?  I eat at these places a lot... probably more than I should but only with gift cards and why not?  Check with your credit card company. (yeah the same one you used on your last visit!) In most cases, they have great discounts on gift cards. I use got $100 of gift cards (In WA State they are not allowed to expire...) for Applebees and I will admit its probably a year's supply or so but only paid $75 so I will eat at 25% off.  Costco is another great source for discounted gift cards as well.

But back to the public charging thing. I will admit my circumstances are different than most where a lot of time (3 hours this week alone for 6 30 min sessions) charging publicly would seem like an inconvenience but of the 3 hours I charged publicly,  90 mins was "billed" to my employer for a State mandated meal period.  But overlaid on those 180 mins was also 125 mins of  "work at home" time that includes a whole bunch of stuff that can't actually be done at home.  So the reality is this week if considering lunch to be a waste of time, one could look at 55 mins of my time wasted charging but the reality is I actually used all my time charging to do something else but sometimes being there has other benefits. 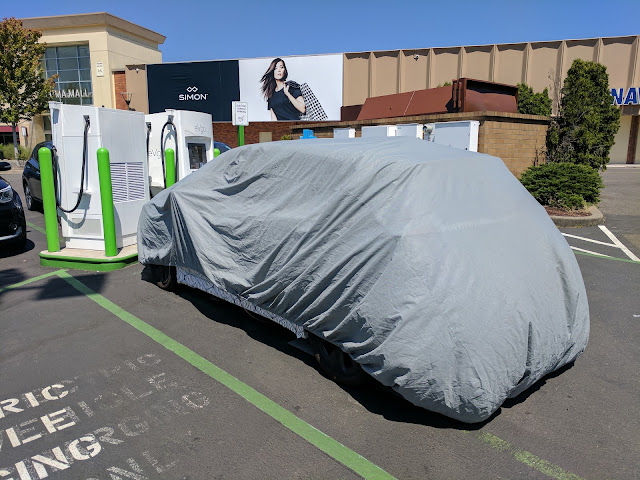 I originally only wanted to stop long enough to make a few calls and get a bathroom break but saw this so had to hang out for the full 30 mins.  So I uploaded that days job and started setting up my equipment for the next day's job instead.  As luck would not have it, they started a 2nd charging session so I decided to move to L2 and wait for them to leave and went inside to use bathroom and came out just as they were leaving so got 2 really sucky pix of the car uncovered but another EVer in South Carolina got a bunch of really good close up pix so you can check the Nissan LEAF Owners site on Facebook for those... or look below!  Thanks Calvin Greer! 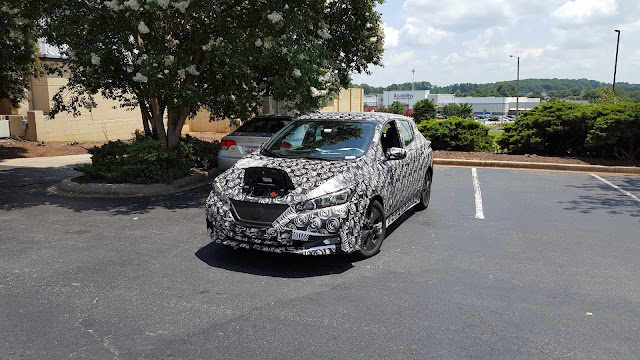 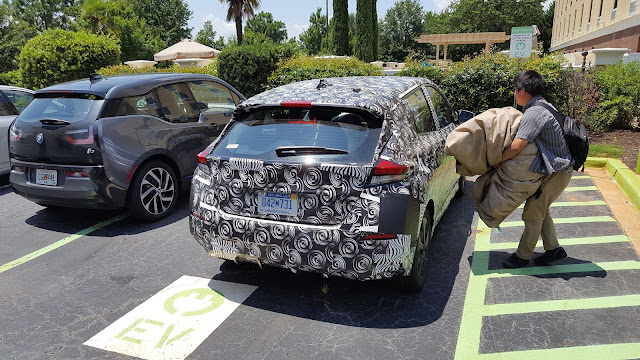 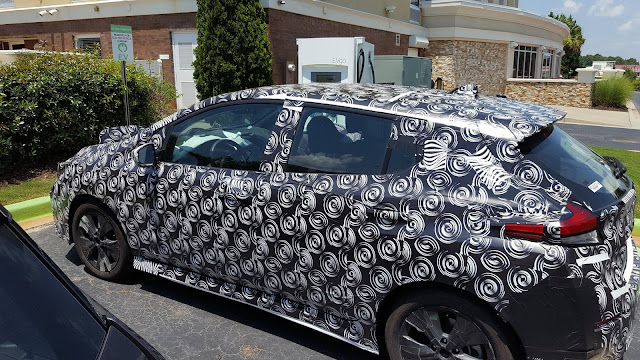 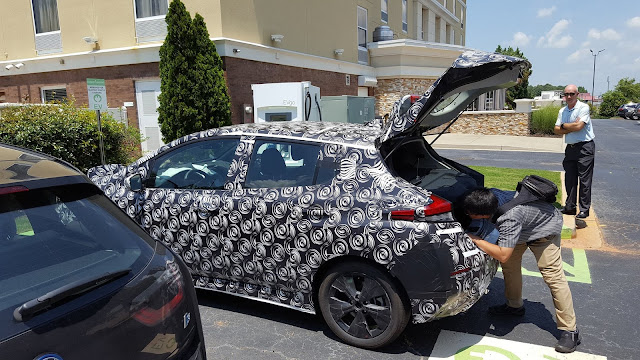 Although I did not get any good pix I did do an up close walk around and the car is longer for sure so I am predicting 2" more rear leg room and larger cargo space in the hatch!

But the real excitement?  I have had a ton of fun (and made a lot of money) due to the extra 6 kwh capacity of my 2016 LEAF so just the thought of what I can do with the much greater range of the 2018 LEAF is really making me a bit giddy!

Posted by DaveinOlyWA at 8:59 AM