200 reasons why you should rotate your tires!

Rotate your tires!  I just had my lease turn in inspection and was dinged for $100 on each of the back tires and it was not due to tread depth (sort of...) but due to umm?... "near" sidewall wear. 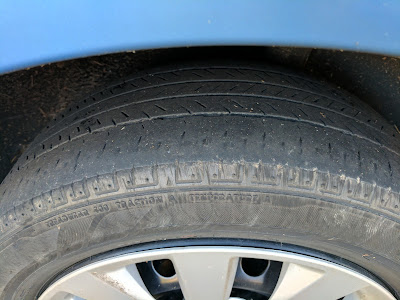 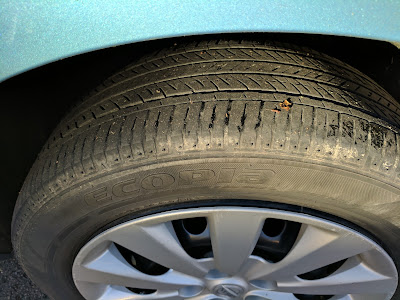 This tire passed with only 1/32nd" more tread but notice the sides?

Now if you recall, I did an experiment where I suspended my normal practice of rotating every 5,000 miles to wait until 10,000 miles to rotate just to see what the difference from front (where wear is the quickest) to the back.  This resulted in roughly a 3/32nds difference from front to back. I was shocked since the rotation interval was about what many recommend, a mere 10,000 miles. (Might have to reevaluate how I negotiate roundabouts as well...)

Now the reason I rotated every 5,000 miles was because my Brother was the Manager of the Les Schwabs in Bremerton, WA.  He claimed it was the best balance between wear, convenience and maximum tread wear and it turns out he was right!

Now my car has been in a million parking lots (nature of the job) and has suffered for it. I have a bundle of  parking lot dings and a scratch and I literally scared myself silly adding it up in my head (its amazing what two brain cells can do!) so I decided to check out the Nissan Guide for Chargeable Wear and Use  and was shocked (and RELIEVED!) to find out I could have literally beat the HE out of the car and not be billed!! Now, keep in mind, its always a fine line and pretty sure "HEL" would have cost me a pretty penny but I mean 3 inch long scratches? not billable!, 2 inch diameter dents? Not billable! Heck, I only have Dings!!  ( a lot of dings but still only dings)  I am golden!!

Notice the $70 for the manuals? If I had known they were that valuable, I'd probably had them in my safety deposit box!

Either way, I came out of the inspection much better than I had hoped so now all I have to say is