October 2016 Drive Report; The End is Near

Resigned to the fact that Winter has finally arrived... well, sort of.  The rain is here setting new records for the month but its like really warm. Last night I left the gym at 8 PM and it was over 60º which is unusual even for moderate Washington weather!

One of the reasons for the higher than normal cost to operate the LEAF was a $7.75 charge for a fast charge Session with NRG. (or EvGO)   I was offered reduced fast charge rates of $2.75 per session plus 15 cents per minute.  Now it all really started with a conversation with a LEAFer from California lamenting he had plugged into a station in the middle of the night, unplugged well before dawn but was billed the entire time despite only actively charging a few hours of the 5 or so he was plugged in. This got me thinking so I used the NRG station because they had the per minute billing and also a timer that ends all fast charge sessions at 30 mins.

So I went to the station at Tacoma Mall hoping a queue did not develop while I was doing this and watched (actually spent nearly all the time talking with someone who had a 30 kwh LEAF) the charge session end and I purposefully waited a few mins before unplugging and sure enough! 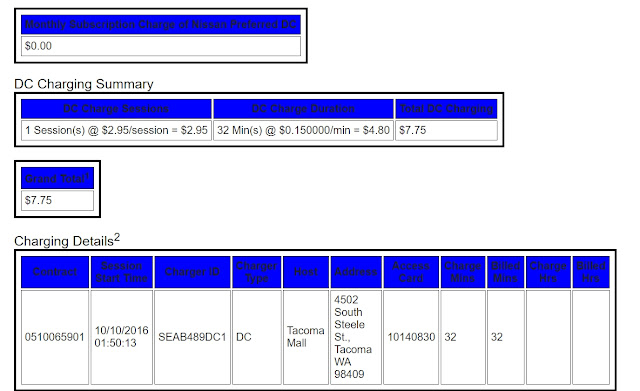 I was billed an extra 30 cents for the extra time spent being plugged in. So if you using NRG and plan to leave the car for an extended period of time, plan on paying for it!  This really becomes a conundrum. Yes, I want to unplug someone who is not actively charging because I need it but at the same time I want to not unplug them to pad their bill so they might learn something from their habit... hmmm, tough choice!


As mentioned the LEAF did not stay home as much as it should have and now the dilemma is I have 400 miles and almost 7 weeks of my lease left.  It looks like I will be eating month 36 of my lease. So in preparation, I had to get an unmodified EVSE for the turn in to not get dinged and if you think that used LEAFs are worthless,  try selling a used EVSE!

Now, like used LEAFs, my EVSE is old and less capable than the shiny new modified ones running around these days. Its an EVSEupgrade.com Rev 0 purchased in March 2011 right after they started marketing them.  It only has two charge modes. 120 volts at 12 amps and 240 volts at 12 amps.  No adjustments available like my newer modded EVSE which can go from 6 to 20 amps in 240 volt mode.

Either way, I figured it wasn't worth much but a free swap should be plenty popular so I posted the swap on Facebook thinking I would use Facebook to determined who was first and then I waited for the onslaught... and waited....and waited... After rebooting the computer a few times, I began to realize nothing was happening. I thought I would give it a day since maybe everyone was busy. It was Halloween weekend after all. So I waited....and waited...

Total response; ZERO!  Not one bite. I mean if I was charging $50 for the swap, I could see it but this was free plus mine came with two adapters!...

So next time you are whining about the low resale value of your used LEAF take heart in the fact that at least it has "some" value!

Epilogue;  Eventually I had to revisit my decision to post the swap on my local LEAF Group page in Olympia (membership 60) and try a "slightly" larger group like the Seattle LEAF Group page (membership 1800ish) and after less than 2 days, I was able to make the swap!
Posted by DaveinOlyWA at 3:19 PM