How 6 Kwh Lead Me Into a Life of Crime

Week one is done (well week and a day) with the new S30 and some very "preliminary" observations.

*The added range has literally turned me into a criminal.  Besides simply driving faster because I can, I had a situation when something unexpected came up just before I had to be at work so I ended up driving 75 mph to work to make it on time. Nice that there is minimal traffic on the streets at 3:45 AM! The best part is this did NOT cause me to have to stop and charge on the way home like a 24 kwh would have done.  Estimated range for that day (which was also one of the heaviest rain days) was still 90+ miles.

*The text read option on the LEAF failed. It was sending the message "I'm driving"  to the last  few people I texted automatically as soon as I started driving.  When you are on the road as early as I am, its a good way to lose friends! 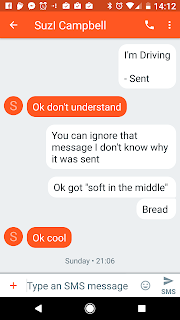 *Had a thin skinned passenger so used heat for about 30 mins the other day. Have to say there was minimal impact the range but....

*Not getting the efficiency performance I normally get.  Not ready to say there is something wrong. But I rarely have this many days under 4 miles/kwh when the weather is this mild. Haven't had the car long enough in enough different climate conditions to make any definitive statements yet. Also have to consider that new tires are also going to contribute to lower numbers. 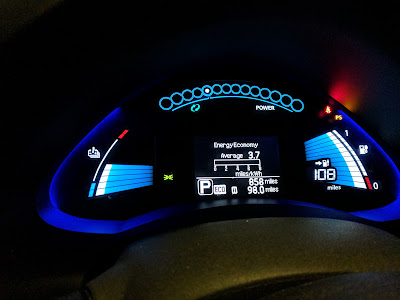 I have a few hills that I almost always drive in neutral. There is a significant difference in the attained speed from Summer to Winter and wet to dry but NB I-5 Nisqually Hill I can normally hit at least 62-63 MPH in the most extreme of conditions in Winter with 64-66 MPH more typical.  I am only hitting 60-61 MPH and that is with a start speed of 60 mph. This car simply does not appear to roll as easily as previous LEAFs, at least not in neutral.

*Fast Charge profile is AWESOME!  To test, I started a charge at 75% SOC and it went at  full charge for almost all of the 15 minute test.  I used the NRG Station at Tacoma Mall which is only a 40 KW station roughly since it max'es out at 100 amps.  My charging rate only dropped into the 75 amp range in the last few minutes.  I will repeat this test at the AV station in Tumwater or Centralia soon since they are 50 KW stations that can run up to 125 amps.  Now why is this important?  Well we still are not really covered by fast chargers in the South Sound area. Huge holes abound here so I am frequently faced with the decision when passing a fast charger early in the journey. Stopping means charging with SOC high which means a much slower charge which also means not a good use of my time. My solution was drive slower to so I could either not stop at all or at least have a comfortable margin (mile or so...) to get to the next fast charger.

*Eco B works well to slow me enough in traffic that touching the brakes is becoming a rather rare event.  This allowed me to discover that this just might make me safer in heavy traffic.  The other day, a motorist waved to me to advise my brake lights weren't working which made me realize that someone thinking my brake lights weren't working is likely to follow me at a greater distance than normal. I am ok with that!

*No steering wheel heater... kinda miss it but I have Seahawks Gloves and have been looking for an excuse to wear them more often, so its rationalization working OT here! 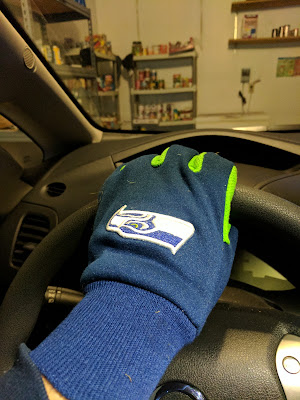 As always, more to come!  Have a nice Holiday all!
Posted by DaveinOlyWA at 9:32 AM