In With The New; Introducing The Era Of Eco B!

When we last blogged it was a goodbye to a very loyal servant who excelled in her ability to get me where I needed to go even on her last assignment of 82 miles in length with double digits to spare (If you are wondering, yes the GOM's primary purpose is to pump up her ego...)

Now it was time to move on but to what? Range is a concern but also have to look at value.  The Bolt seems to be the only option that provides a significant range difference but it was probably at least 3 months out and its my prediction that pent up demand for a 200 mile EV will insure that the supply remains tight for most of the year meaning the Bolt will go for premium prices for most if not all of 2017. This is verified at least initially by reports from the first orders of the Bolt where buyers reported there was absolutely no negotiations on price.  So an average out the door price of $40,000+ would be my likely scenario.  Now WA only waives the first $32,500 so I would be taxed on the extra.  So pencil math says I maintain the 2.1 cents per mile on the Bolt which is HIGHLY unlikely and that will be explained below, and a target of 22 cents per mile, on a purchase, I would have to be around 175,100 miles based on a $40,000 purchase price, $675 sales tax, onl $6,000 of the fed tax credit,  $5,000 down and 7 year loan at 3%.   So your results may vary but I give you my data so you can figure it separately.

Of course it doesn't make sense to compare purchases to leases but with no way of knowing what the Bolt will lease for, I really don't have a lot of options.  But its 238 miles of range!  Sorry but purchases require a long term commitment and 175,000 miles on an unproven and unseen car is not gonna happen here.  So chalk it up to bad timing cause not gonna lie, if the Bolt was on the streets, I could make real comparisons, but bad timing I excel at!  Nevertheless, in trying to make it work, I tried dozens of different scenarios including a $20,000 down payment to reduce interest but again,  it was that 175,000 mile commitment that held me back.  But I was still hesitant.  Then election day came.  Again, bad timing but I fear its for all of us, not just me...

So on to the LEAF option.  Here lease was easy and HUGELY beneficial financially.  For those that don't know, leasing another LEAF could potentially save you thousands.

*Up to $500 of damage to your returned lease vehicle;  GONE!

So in reality, the Bolt didn't have a chance. $40,000 minus whatever you qualify in the fed tax credit might be affordable to some, but not to me.

So off to my Employee discount page! It didn't take me long to find out I don't get to choose what dealer my interest is sent to so it took some finagling and 8 errant offers to finally figure out how to get who I wanted to see.  In examining the EV movement and the dealers doing the most to promote it, I immediately eliminated everyone who did not have a fast charger. This I knew I would do several months ago so then I started monitoring how often these fast chargers were working and how long it took to get them fixed when they broke. I can't blame the dealership for the equipment but I can blame them if they are dragging their feet to fix them!

Well, the dealer track record on this issue has not been stellar and I soon realized I had to expand my radius to get 3 options so my "circle" went from 50 miles to 83 miles.  Anyway, the winner was a near coin flip, but won because of his involvement with the Seattle LEAF Facebook page, his gushing customers, etc. It definitely wasn't because he was convenient! So yesterday, I charged up my old dilapidated LEAF and started on my 82.2 mile journey to see Ray at Campbell Nissan in Everett.

So we started out with the S30 (naturally) MSRP just over $33,000 after destination and some sort of protection package.  Discounted the protection package and my employee discount did not get the memo on the MSRP change so the discount for a plain S24 was around 800ish. Discounts on the higher trims ran $2000-$2500.  Either way, that was applied plus Dealer discounts, new price $29,330.  Notice this price is basically back to normal employee discounts when comparing MSRP of $30,860.

Federal tax credit which Nissan applies at 100%. FYI; not every manufacturer does this. New price $20,830

Finally we have manufacturer's incentives. Keep in mind, if you are buying, incentives are larger but "Lease Cash" is nothing to sneeze at at $4,125.  New price $16,705.

Now, earlier I mentioned that getting 2.1 cents per mile on the Bolt would likely not happen and my reasoning is that it would not have happened for me either in my 2013 LEAF but I was able to take advantage of Nissan's "No Charge To Charge" program for 90 days (NCTC) as part of the battery settlement. I won't lie, I took MAJOR advantage of the program. My alternative was a $50 check. So I decided I would use $50 PER MONTH in public charging; a goal I accomplished quite easily.

I also mentioned earlier that I was prone to bad timing.  This is my 3rd LEAF lease and first NCTC qualification because yes, I barely missed qualifying for it my first two leases.  This time instead of 90 days of charging, I get 2 full years!!  My only question; Can I use it for the last two years of my lease instead of the first two years? Cause I don't see me needing it, at least not right away. :) 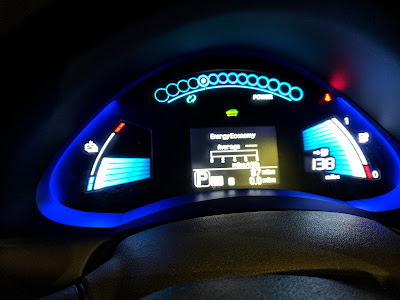 Anyway, after the math exercise was done  AKA negotiating the cost.  (all done by Facebook Messenger. This was the "real" reason why Ray was chosen. He was simply easy. )  It was time to pick a car.  I had a choice of Red or Blue but Red looked too much like the old Red but the Blue was nearly identical to my 2010 Prius so why not! 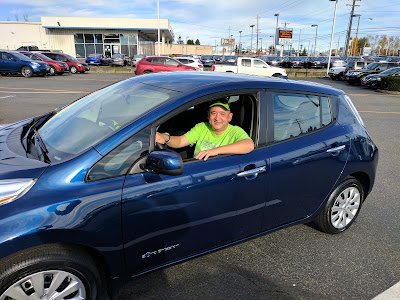 The 2nd consideration was time on the lot. The S30 simply hasn't been around long enough to worry about that.  So I fully expected a battery at 100%. So build date was 10/16 so far so good.  So I hooked up LEAF Spy and.... 99.91%... a bit of a disappointment. But I already knew she just needed a bit of exercise and the next morning pretty much confirmed this. 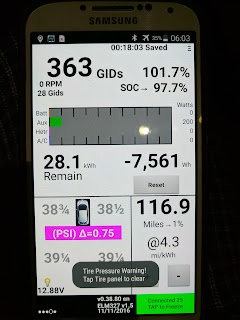 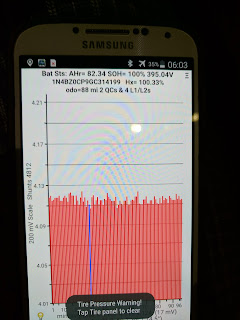 FYI; Before you say it, Yes I realize those tire pressures need fixing!

But as inflated as these numbers seem to be, the one thing that surprised me was Eco B. Where has this been all my life! It is a near perfect fit to Puget Sound Area traffic!   I left Everett at 89% SOC and 82.2 miles later, I still had over 50 miles on the GOM!  It was like being paroled after a 15 year sentence.  I already knew that 120 miles wouldn't be a challenge to me but I hadn't figured the impact of Eco B.  Seeing all the regen bubbles filled when coasting in Eco B at 30 mph was HEAVEN!!  Not quite like one foot driving (although I don't really want that. Close but not quite that extreme. ) but it is something I am sure to be investigating quite frequently if not all the time!

To summarize; In changing to the S 30, I lost steering wheel heater.  Now this was something I used extensively because discounting the few dozen times I had passengers, I might have used cabin heat 2 or 3 times maybe? (I actually don't remember using it at all, but I am fairly sure I used it to see if it worked so I am sticking to my "2 or 3 times" statement!)

*better backup display (this was also a shocking difference!)

*A realistic purchase option (which I expect will go down even further in 3 years!)
* a hidden perk

all for an additional 24 cents per month so now you know why I choose to LEAF again over the uh.. hmm??...uh... what car were we talking about earlier?

Even if you are not in the market for a car, you have to meet Ray. He is a fascinating person to talk to and his philosophy on life is amazing.  At the dealership there is a sales board (every dealership has one) that only has room for 30 sales per month. Ray typically uses up his line on the board and then loops around to fill in the end of other people's line and its easy to see why. But if you are in the market, keep in mind that the more cars a dealership sells, the better the price they get from the manufacturer.  Ray is active on social media and a valuable source of info.  Remember who told us about the 30 kwh LEAF SIX MONTHS before anyone else knew it? Unless you were there when the 100 people online told you you were full of it only to see them eat crow later, you just don't know how it felt!

But if that isn't enough. Do it to combat World Hunger.  We have it lucky here. We got into Oil and it fueled our industrial growth and made us rich. It has become sadly apparent that many areas of the World will never get that opportunity.  Now some would say that "We did it, so they should be allowed to do it" (direct quote btw...) But that is not how it works. We also had slavery so because we did it, everyone else gets a turn too?  That is not how it works.

But each LEAF Campbell Nissan sells, they will donate a goat to a needy family in Haiti or Kenya.  So if you don't want to help Ray, then do it because every child deserves to eat. 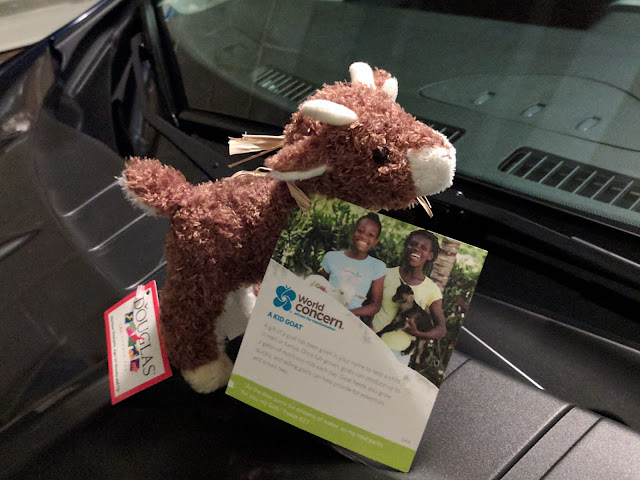 As predicted, I received a refund for overpayment of the registration fees and its a bit puzzling because the breakdown seems right except for the fact that the $150 EV fee is missing...

Posted by DaveinOlyWA at 9:11 AM