On my last blog I mentioned I would be using a 50 KW fast charger to see how differently it reacted and as expected, it was better than the 40 KW charger proportionally which means more power in the same amount of time.  Average intake on 40 KW for 30 mins (NRG auto shutoff time)  14ish kwh.   AV on 29 mins; just over 20 kwh!!... I think... 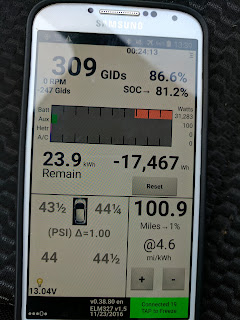 The numbers bounce around a bit but was trying to
show that it was charging at 32 KW over 80% SOC!

I used 50 KW AV DCFC yesterday for the first time (keeping in mind NRG is a 40 KW charger for the most part) and some "interesting" numbers.
LEAF Spy read 62 GIDs 4.8 kwh available and as always I reset the energy counter just before charge started.

Checking LEAF Spy logs I can get a fairly good power calculation by summing the power found by multiplying the power on OBC out by the epoch delta (which I think is in seconds) and dividing by 3600 to get a watt-hour approximation. This verifies LEAF Spy readings (why wouldn't it?) and did see a brief hit at 48.6 KW! (so much for that never over 48 KW theory)

shown from left; line number, GIDs, epoch time, OBC out,
GPS Status (anyone know what it means? strange to see different
numbers when car was parked?) and kwh calc

I dont know the answer, but I would suspect that the gids is tuned to the lowest cell voltage and if you started with an unbalanced pack then you could get access to some energy you already had but wouldn't have been able to use if you had kept driving.


Interesting theory especially when considering the pack will only give based on the lowest voltage cell so an out of balance pack would leave a lot of GIDs unused among the higher voltage cells and generally the voltage delta among cells widens as the SOC drops and the opposite happens when SOC rises.

Now its well established that balance is good but not necessarily critical for longevity when needs are met in without hitting low SOC.  But the question; Is Nissan's BMS that sophisticated?  Because if it is, this does explain a few things.

I reported a few years ago having additional range below the "zero kwh remaining" level. In fact it was this extra mile or so of hidden range that allowed me to make it home on what appeared to be a "GID on steroids"

Will be doing this again to see if the results are repeatable but for those Electrical Engineers out there; Does this seem plausible?  I understand balancing happens all the time but without a "ceiling" to slow the higher voltage cells, it was my understanding the balancing current was simply too low to be "quickly" effective.  Since the SOC peaked at 92% SOC, am I to think that some cells had already reached their peak voltage?  That sounds like my pack needs a lot more balancing?
Posted by DaveinOlyWA at 8:18 AM