2017 Chevy Bolt; Affordable EV For the Masses Or "Trumpetware?"

When it was announced, we really didn't take it seriously. It was 2 years away, it was Chevy and Tesla was already in town.

Then the prototype  came this past Summer. With sneer, road tests were done and redone and done again. 238 Miles??  Like WOW!! This wasn't pampered miles AKA "100 mile LEAF" , it was "real" miles!

Something was wrong. By all accounts (if you believe advanced hype) Chevy would be first, and with longer range!! What gives?  How did Chevy all of sudden vault into the upper echelons of EVdom?

But then, little pieces of reality started sinking in.  Granted the Bolt is real. There are already Bolts on the ground in OR with hundreds of deliveries on the road to the dealership as we type. So its not "vaporware" by any definition...

Nationwide Availability was being redefined.  California and Oregon would be getting huge allotments ASAP with the other "CARB" states following.

Not only is the 2nd largest EV market, WA not on the list but neither is favorite Son, Michigan. So what started out as a nearly 2 year advantage GM had over Tesla's "affordable EV for the Masses" may now be a near dead heat in many areas.

So when will the rest get theres? Well its anyone's guess and since you are reading this, I am thinking you want to hear mine.

The Bolt roll out seems to be following the Volt roll out at least initially but there is a HUGE difference;

First off,  unlike Tesla who plans to manufacture their "affordable EV" in nationwide volumes, Chevy is not.  They announced initial volume figures that have slowly gone down to the current "20,000 to 30,000" in the first year.  With the pent up demand for a longer range EV, that might not even cover the 11 states mentioned above.  If we remember, the Volt did not sell very well until they put in the huge price cuts.

Lyft; Remember a large allotment of the initial units will be going to Lyft.

Unless Chevy has a backup plan to double production, this leaves the rest of us out in the cold.  Now I know a few Washingtonians who have talked with dealers, paid money for their place in line and are expecting their Bolts by early Spring and have ending leases backing up their bets.

Its my prediction we not see "available" Bolts until Summer or later.  But we will see them, eventually.  Makes my LEAF lease decision a no brainer. Waiting a few months would have been terribly inconvenient, but 6 months is out of the question. I would literally have to buy another car to cover the gap.

So unlike "vaporware" that has a detailed announcement complete with a feature list, etc. This is more like "Trumpetware" when the product announced, happens more or less on time but in a very redefined way. IOW; the hype is not living up to the announcement... at least not yet.

*The Bolt won't be available nationwide at least initially.  To me a nationwide launch is pretty much that. Available in most of the states within a few months.

*Not the affordable EV we have been looking for.  Lease figures have come out for the Bolt but a straightforward calculation is not that easy due to sweetheart deals that appears to only be available to CA lessees only but if punching in basic numbers for lower trim with fast charge, we are getting roughly a total lease cost of $17746 that includes roughly $617 in sales tax for the portion exceeding $32,500.  This works out to a lease mileage rate of  39.4 cents per mile.  Weighted by range/price drops it to .001657. 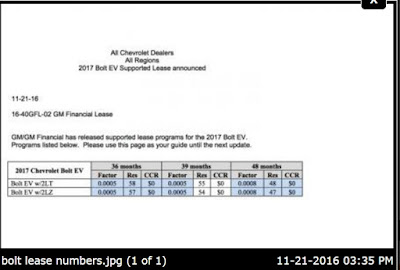 On my LEAF lease;  Total cost (real cost yet to be determined but this is close enough) was 18.9 cents per mile divided by the 108 mile EPA estimate (although I have found that to be on the low end) brings a factor of .001770 or 6.8% more or $585.45 over the life of the 3 year lease.   No word yet on other possible Bolt perks like NCTC but I could easily get that much free juice.

* Low initial volumes will keep demand high and less than optimal lease terms will keep the buy/lease ratio high. Looks like Chevy is pulling out all the stops to maintain what maybe a razor thin profit margin. This tells me that the T3 has them running scared?

Now, keep in mind; this is pure speculation since lease terms constantly change to address current market conditions and the pathetic terms for the Bolt can't get worse.  For one thing; only $2500 of the $7500 fed credit is being applied to the lease so in reality, there could be a huge discount 6 months from now especially if sales are sluggish but am guessing that is not going to happen. Too many people have the money and want the peace of mind, longer range EVs bring. But one thing is clear and that is buy is a far better deal than leasing as long as the car is a reliable long term driver.

**Edit** Thanks to Brian Henderson, I am reminded that the WA State sales tax waiver is on its last legs and the current super sweet lease deals on LEAFs and Souls could very well drain the well dry...
Posted by DaveinOlyWA at 9:07 AM